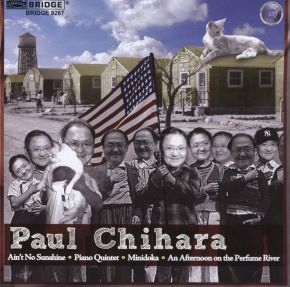 Los Angeles Times critic mark Swed writes: “It is almost easier to think of Paul Chihara as several different composers. There is the Chihara whose sensitivity to exquisite instrumental color has made him a favorite with such performers as conductor Seiji Ozawa and the Sequoia String Quartet. There is, however, a strong theatrical side to Chihara which expresses itself in works for dance, musical theater and film. And there is Chihara’s love for American popular music of the 30s and 40s.” Many of these traits turn up in this panoramic survey of Paul Chihara’s recent chamber and orchestral music: The Piano Trio Ain’t No Sunshine is based on a blues ballad; the Piano Quintet is based on an Italian World War II diary; Minidoka is based on Chihara’s memories of his childhood years spent at the American WW2 camp for Japanese/Americans, Minidoka; and An Afternoon on the Perfume River, commissioned by the Orpheus Chamber Orchestra, takes its title from a poem by a North Vietnamese poet. Chihara has brought together a number of today’s leading performers in this moving, superbly played recording.