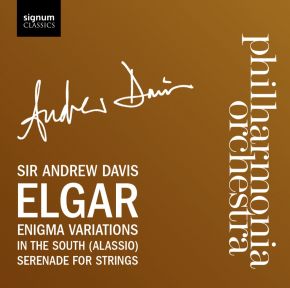 The Philharmonia Orchestra / SIr An

The Philharmonia Orchestra is widely recognised as the UK’s finest orchestra with an impressive recording legacy, this being their fifth disc with Signum. This disc combines the Philharmonia’s renowned sound with the leadership of Maestro Davis, who’s recording and performing career spans through all the great orchestras of the world. This disc features Elgar’s best known orchestral works; The Enigma Variations depict twelve of Elgar’s family and friends in fourteen variations built on the original Enigma theme, one of Elgar’s earliest and still most frequently played orchestral works, Serenade for Strings, and In the South, Elgar’s Concert Overture written for the Elgar festival in 1904.