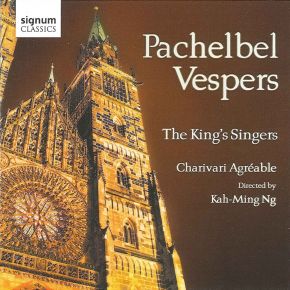 The music contained in this record represents a selection of Vespers movements written by the organist Johann Pachelbel. They have in common the distinctively sonorous scoring of four or five-part choir, accompanied by a six-part string orchestra to which is added, at the composer’s express request, a bassoon.

‘Charivari Agréable is one of the most versatile Early Music groups around at the moment; under its benign director, Kah-Ming Ng, it appears to be infinitely adaptable, finding musicians who can fit into any of its many and varied programmes’ International Record Review. They represent ‘a new and very exciting phase of the early music revival, one that enriches the existing repertory and can bring us ever closer to the spirit of the original music’ Gramophone.

Described by The Times as a group that has “stayed in character over four decades, yet retuned itself to the times” and by Gramophone as “enchanting the ear from first to last note” The King’s Singers are truly remarkable. They continue to be one of the most sought-after and critically acclaimed vocal ensembles in the world, performing a rich and varied repertoire from Gesualdo to György Ligeti and Michael Bublé. Internationally recognised for their work in the classical field, they retain the sparkle that delights so many fans when they perform much loved numbers from the lighter end of the repertoire. Whatever the music The King’s Singers are instantly recognisable for their spot-on intonation, their impeccable vocal blend, the flawless articulation of the text and incisive timing.