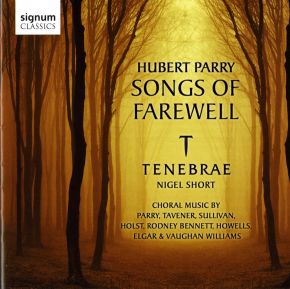 Following a string of five-star reviews for their previous discs of 20th-century French choral music and Renaissance polyphony, the professional chamber-choir Tenebrae go from strength to strength with this new recording of British partsongs and choral music – centered on Hubert Parry’s Songs of Farewell.

Composed towards the end of Parry’s life, the Songs of Farewell have taken on something of an epithetical interpretation; they are almost a musical summation of his compositional life, reflecting Parry’s love of English renaissance madrigals and partsongs as much as the influence on his work from German composers like Brahms – made more complicated as these works were composed as the country (and its music) fell out of favour at the start of the Great War. This album also includes works by Tavener, Sullivan, Holst, Rodney Bennett, Howells, Elgar and Vaughan Williams.