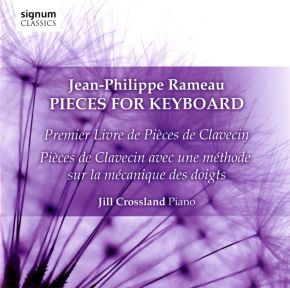 Jean-Philippe Rameau’s modest output of works for keyboard (around 50 in total) are a crowning influence in French 18th-century instrumental music – summed up by one commentator as being “a paradigm of his mastery, for surveying it is to review many facets of his greatness”. Famed for his additional contributions to French opera and for his advances in musical theory of the day, his keyboard works are beguiling in their mix of subtle beauty and virtuosity.

The characterful works invoke both pictorial and poetic themes – a style that performer Jill Crossland describes as an “ability to characterise, to construct a miniature world in a few instants.”   British pianist Jill Crossland is well known for her performances of 18th-century repertoire – her recording of J.S. Bach’s 48 Preludes and Fugues has been described in glowing terms by a number of reviewers:  “Within seconds you’re drawn into the gentle hammer-strokes that unlock Crossland’s warm, rounded and perpetually singing sonority ... The preludes inspire Crossland’s best work“  Gramophone