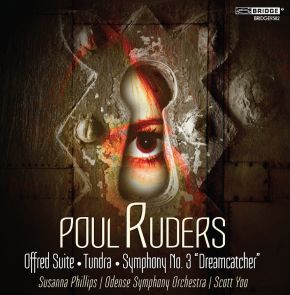 This disc presents the premiere recordings of two major Poul Ruders orchestral scores. Offred Suite is a suite of the five major arias from Ruders’s greatest international success, the opera, The Handmaid’s Tale. Ruders has structured the music in Offred Suite to flow continuously, so that the overall effect is that of a monodrama. Singing the role of Offred is the brilliant young soprano of Metropolitan Opera fame, Susanna Phillips. Ruders’s Symphony No. 3 ‘Dream Catcher’ is a 30-minute long work in two interconnected movements. After a stormy introduction, the music dissolves into the main movement, a long-breathed Adagio sognante. This dreamlike movement connects to a Scherzo prestissimo, a movement which annotator Malcolm MacDonald describes as: “a tour-de-force of virtuoso orchestral writing, a teeming, yelping, squealing, buzzing, chittering, whooping riot of sound.” The performances by the Odense Symphony under conductor Scott Yoo are nothing short of spectacular. Volume Six of Bridge’s Ruders series (BRIDGE 9336) was Grammy- nominated, and Volume Seven (BRIDGE 9375) has just been chosen as Editor’s Choice by Gramophone.