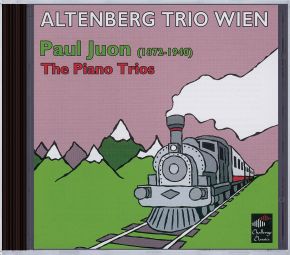 The world premiere recording of the six piano trios by Paul Juon (1872-1940), a remarkable composer. He was born of Swiss descent in Moscow in 1872, taught in Berlin until 1934, and spent the last years of his life in the country of his ancestors.

The first trio in a minor opus 17 was composed around 1901 in Berlin. It forms a culmination and conclusion of the 'russian' period of Juon. Especially in the first and last movement one can hear the east-slavic folksong with all his characterics (fourth and fifth motivs, modal harmonies etc.) unquestionable.

The second trio, Trio-Caprice on Selma Lagerlöf´s "Gosta Berling" in b minor opus 39, appeared in 1908 and was dedicated to the Russian Trio (Russkoe Trio) which was committed to the works of Juon and also played the premiere of this opus.
Juon's collegue during his studies, Josef Press (1881-1924), one of the best representatives of the violin school of Moskow, had founded this ensemble 1906 togehter with his wife Vera Maurina (piano) and his brother Michael Press (violoncello). In the prewar years the trio lived in Berlin and belonged to Juon's close friends circle. Also Selma Lagerlöf (1858-1940), who already got world famous with his first work "Gösta Berlings Saga" (1891), met Juon in Berlin. He expressed his admiration for the individuality of the great poet der großen poetess in two large-scale chamber music compositions: the rhapsody opus 37 for piano quartet (1907) and the in the next year finished Trio-Caprice.
About the relationship between literary text and its musical interpretation the composer noticed according to the premiere of the work: "This work is inspired by Selma Lagerlöf her book »Gösta Berling«, but is not progammatic music in the usual sense, because it doesn't musically characterise certain processes, situations or persons. It is more the individual style of Lagerlöf her book - the capricious, rapsodic and episodic, so the atmosphere of the whole book, that has influenced the composition of Trio-Caprice."

The third trio in G Major opus 60 was composed in Berlin in 1914/15. The suggestive power of Trio-Caprice work through in seven years later written third piano trio (1915) which was dedicated to the couple J.H. Block. In the second movement, which surely belongs to the most mature and deepest moments in Juon's oeuvre, appears an almost literal citation of the beginning of opus 39. Furthermore this work is more related to the first piano trio, which main features we find again, but now more mature, fuller and richer.

The fourth trio Litaniae arose (according to Juon's own works index) in 1918 and was premiered in the next year in Berlin. In 1929 the composer revised the work enormously - because the original version, just as the biggest part of the hand writings of Juon must be regarded as lost, the extent and nature of this adaptation can no longer be reconstructed.
In no other part of his works Juon has found such a closed and at the same free associative language. The principle of construction - all themes are formed out of a handfull archetypal small motives and in a complex way connected with each other - is so submerged from the stream of consciousness of the conjured images, that it nowhere pushes the listening experience, but only works as the logic of the dreams from the unconsciousness. And everything seems possible just as in a dream, at the same time and reconcilable: in the synoptical musical language of this work the distance between Perotinus Magnus and Gustav Mahler seems not bigger than between Rachmaninov and Respighi. The manifesting eclecticism of Juon is not a weakness, but one of his artistic nature ideally corresponding way of expression.

The fifth trio Legend in d minor opus 83 was composed in Berlin in 1929. The same qualities, which we saw in the Litaniae, characterize also the new version of this work (1929) which was dedicated to the legend of Eugène Couvreu. The decade between the two designs made the musical idiom of Juon a significant degree more complicated. Of his piano trios this work is without doubt the most difficult and challenging, although the preceding Litaniae was more succesful. But this has to do with the fact that we have moved from the timeless world of dreames in the broken and alienated temporality of the legend. The scenes of the story realy remind a little bit of the fantasy of medieval hagiography, but not in the style of Jacobus de Voragine, but a little like how Vittore Carpaccio revitalised these from the secured ground of the Renaissance. Naive chivalry, faithful simplicity, fairytale spook - all these elements are united, but to a certain extent not firsthand, but relived from a distance of a complicated and contradictory modern mind. While Juon chooses for his latest big chamber music work this multi-layered and complex form, he summarizes the sum of his musical heritage in an impressive and touching way.

The sixth trio, Suite in C major opus 89, was composed in Berlin in 1932. After the concentration of Juon's both big trio tone poems (Litaniae and Legende) some playful relaxation had to come. So Juon composed a last work for piano trio, just before he returned to Switzerland. This work provides light miniatures and can be considered as a nice counterpart to the big and concentrated preceding works. Juon dedicated the cycle to the pianist Bronislaw von Pozniak (1887-1953) and his trio. One could also interpret this suite as a tribute to the cosmopolitan spirit of the metropole Berlin, which was his home. Thus one find in these five pieces, besides many other reminiscences also some russian and scandinavian colors.