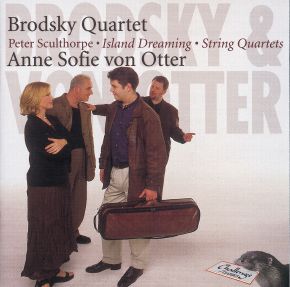 Island Dreaming
String Quartets by Peter Sculthorpe
For a long time the British flag fluttered over the musical life of Australia. However (or perhaps we should say therefore), composers had been searching for their own musical identity as early as the middle of the 19th cen- tury. In 1849 Isaac Nathan (1790-1864) published a volume of transcriptions of Aboriginal songs, tailored for the salon through the addition of discreet Victorian piano accompaniments. It was Percy Grainger (1881-1961), who, in the quest for a peculiarly Australian music, discovered the unique landscape of the continent as a source of inspiration:“[Australia is] sure to be a much-meaning land for tone-art, with heaven- tinted voices that tone-mir- ror the rich purple hills seen at some farness in the Australian air.”

Also for Peter Sculthorpe, the spiritual father of new music in Australia, the landscape is an important source of inspiration. Born as a “simple country boy” in Launceston, Tasmania, Sculthorpe studied at the University of Melbourne. Because he felt the need to develop himself further in the “old country,” he moved to Oxford, where his teachers were Egon Wellesz and Edmund Rubbra. The death of his father in 1961 brought him back to the land of his birth. June of that year saw the creation of Irkanda IV, according to Sculthorpe his first mature com- position.The word “irkanda” is an Aboriginal word that Sculthorpe interprets as meaning a remote and isolated place.This work for violin, strings and percussion is the music of a lonely soul in a world which has lost the bond 5 with the earth and its ancestors, a theme which runs through his whole output: “I probably was that lonely soul.  But more and more I became one with the landscape and the solitude and loneliness went away.”

The manner in which the Australian landscape can serve as the basis for an indigenous musical tradition is descri- bed by Sculthorpe with reference to his orchestral work Earth Cry (1986, arranged for string quartet in 1994) as follows:“The lack of a common cause and the self-interest of many have drained us [Australians] of much of our energy. A bogus national identity and its commercialisation have obscured the true breadth of our culture. [...] Perhaps we now need to attune ourselves to this continent, to listen to the cry of the earth, as the Aborigines have done for many thousands of years.”