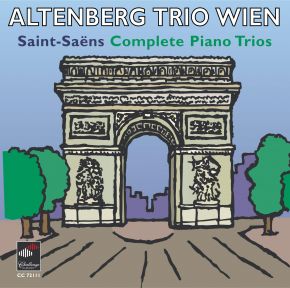 Camille Saint-Saëns composed these two piano trios some 30 years apart. They could hardly be more different. The First Trio is a model of jubilance, youthful optimism, and sheer joy. The quick, nimble Scherzo darts about with mischievous frivolity while even Andante (in A minor) is far from a brooding affair. The Second Trio is a much darker, solemn, ominous contribution. Saint-Saëns even breaks the mold of the traditional four-movement trio and adds an uncustomary fifth movement. Both trios place great demands on the technical abilities, ensemble cohesiveness, attention to detail, and sound quality of its performers.

Saint-Saëns worked on his first piano trio in the period from summer 1863 to October 1864.

During the third quarter of the 19th century, when the French only seemed interested in opera, Camille Saint-Saëns (1835-1921), almost single-handedly, attempted to make the case for chamber music, which so many of his countrymen continued to think of as something German. Although famous for his larger orchestral works and instrumental concertos, he devoted a great deal of time and effort to writing chamber music. Not only does he have two string quartets to his credit, but he also wrote three works for piano trio, a serenade for piano, organ, violin and viola ( or cello), a quintet for piano, two violins, viola and cello, a Caprice on Danish & Russian Aires for piano, flute, oboe and B flat clarinet and his Septet for piano, trumpet, two violins, viola, cello and bass.

Although the First Piano Trio is a relatively early work, by the time he came to write it in 1863, Saint-Saëns already had composed a piano quintet, a piano trio suite and a serenade for violin, viola and organ. The well-respected critic and savant, Emile Baumann, writes of Piano Trio No.1 as follows:
"The First Piano Trio is one of the most inspired moments of his youth. The opening theme of the first movement, Allegro vivace, expresses the joy of adventure. Its alluring gaiety communicates itself to the cello and permeates passages that are heavy with foreboding as well as those that are buoyant. The following Andante is a model of plastic and expressive melody. The main theme unfolds like an ancient ballad while the conclusion is filled with an intimate tenderness. The sprightly third movement, Scherzo, is filled with humor and wonderful cross rhythms and pizzicato effects. Much of the same buoyant spirit of the first movement is also to be found in the boisterous finale, Allegro."

Saint-Saëns worked on his second piano trio from February to May 1892. It is one of the great masterpieces of the piano trio literature.

"I am working quietly away at a trio which I hope will drive to despair all those unlucky enough to hear it. I shall need the whole summer to perpetrate this atrocity, one must have a little fun somehow." So wrote Saint-Saëns to a close friend in the spring of 1892 about what has often been called the greatest French piano trio of the 19th century. The truth was that Saint-Saëns worked long and hard on this work, putting, as one critic noted, all of his accumulated experience and wisdom into this it.

Piano Trio No.2 begins with an Allegro non troppo which is dark and ominous. It is a leisurely theme which takes its time as it builds tension toward an inevitable climax. When the climax is finally reached, powerful torrents of emotion are released. A second theme, a long time in coming, is more lyrical and optimistic. The chirpy theme of the second movement, Allegretto, begins like an inconsequential salon piece, but suddenly violent bursts of emotion interrupt it, and then a hectic, almost frantic melody, racing helter skelter, follows. When the main theme to the third and middle movement, Andante con moto, is briefly stated by the piano, it sounds almost inane, but as the strings enter, immediately the music exudes a strong perfume of romance, which over time reaches considerable emotional heights. The Grazioso poco allegretto which follows, though it starts with a dark chord, is light and graceful. The finale, Allegro, begins quietly and in a sinister vein. A canonic fugue is briefly begun and interrupted as the music skyrockets forward with tremendous élan.