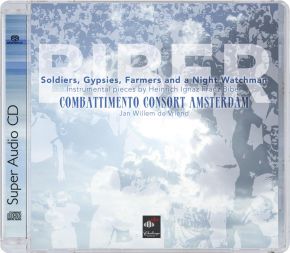 Nearly all the pieces on this CD have an extra- musical programme. In other words, in each piece, a story is told, or a situation described. Whether humorous or serious, the pro- gramme always tells us something about the culture in which the music functioned. A pro- gramme can be deemed successful only in so far as the listener is actually familiar with the situation to which the music refers and under- stands it or finds it humorous. Programme music thus gives us a glimpse into the world of the seventeenth-centur y listener who heard the first performance and who was delightfully enter tained, smiled or was deeply moved.

The works presented on this CD were performed in more intimate, likely court, settings during evening concerts or were intended to mark the arrival of important guests. Biber himself played the violin in the orchestra or ensemble – the number of instruments per par t is unknown. Of par ticular interest is that Biber composed only one violin part, but wrote two or three viola parts. Consequently, the ensemble as a whole has a somewhat darker sound, allowing the violin to soar like a lark.

All the works on this CD show that, for his time, Heinrich Ignaz Franz von Biber, who was knighted in 1690, was practically an avant-garde composer. As none of his contemporaries did, he pushed the limits of string instruments. Moreover,he created quality musical entertainment both today (!) and in his own time.