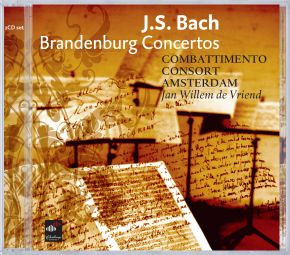 In 1718 Bach travelled to Berlin to order a new harpsichord for his patron, Prince Leopold of Anhalt-Köthen. Presumably, it was during this visit that he came into contact with the margrave of Brandenburg. Christian Ludwig von Brandenburg (1677-1734) resided at the Royal court in Berlin and maintained his own music Kapelle. Bach is known to have performed with the Margrave’s Kapelle during one of his visits to Berlin. It was perhaps on this occasion that he was commissioned to compose a set of concertos for this orchestra. Though a commission from such an influential man as the margrave of Brandenburg must have been an exceptional honour for Bach, it was quite some time before the work was completed. In fact, it was two and a half years later that Bach sent the magrave his Six concerts avec plusieurs instruments, works that have gone down in history as the Brandenburg Concertos.
These concertos may never have been performed by Brandenburg’s Kapelle. When Christian Ludwig died, his ensemble comprised a mere six musicians, too few to perform the Brandenburg Concertos. There are, in addition, reasons to believe that Bach may not have composed these concertos specially for the margrave of Brandenburg, but rather that they were older compositions which he revised and collected in one bundle. On close inspection, the score appears to have been hastily written and in part copied from previous compositions. Indeed, several of these concertos do survive in earlier versions, revealing before reaching their current state these works already had a long history. Viewed from a different perspective, the score’s notation is extremely precise with regard to pages, the number of bars, the number of notes, and so forth. The book Bach en het getal (Bach and numbers), by Van Houten and Kasbergen, Holland Walburgpers, 1985), demonstrates that the score is permeated with number symbolism, even possibly numerically conveying the dates of Bach’s birth and death.

It is currently thought that Bach initially intended the Brandenburg Concertos for the use of the Köthen court Kapelle, of which he was Kapellmeister from 1717 to 1723. The settings in which these works were performed in Kothen can be deduced from the financial records of Prince Leopold’s court. The virtuoso, solo parts would have been performed by the violinist Spieß, the oboist Rose, the flautists Freitag and Wurdig, and the trumpeter Schreiber or Krahl. The remaining court Cammer-Musici (Chamber Musicians) were the violinist Marcus, the cellist Linigke, the viola da gambist Abel and bassoonist Torlee. One must realize that in those days musicians were generally proficient with one or more secondary instruments in addition to their main instrument. Bach himself, for example, would undoubtedly have been the harpsichord soloist in the Fifth Concerto and have performed the first viola part in the Sixth Concerto.
The other viola part was most probably played by the concert-master, Joseph Spieß, and the flautists would have taken the recorder parts for their account. Perhaps, Prince Leopold joined in as second viola da gambist. This would explain the simplicity of the viola da gamba parts: though the first viola da gamba comes to the forefront as soloist in parts of the first movement, it would naturally have been contrary to the etiquette of the time that Herr Abel musically overshadowed Prince Leopold.

The broad setting of the FIRST Brandenburg Concerto indicates that it must have been com- posed for a special occasion for which additional musicians were hired. The horns play a particularly striking role. As there were no hornists in the court Kapelle of Kothen, itinerant hornists were often contracted to perform these parts. The virtuosity of the horn parts and the hunt motifs with which the first movement opens were something new and indicate that the conception of the instrument as being an accessory to the hunt began to give way as it gained acceptance in ‘art-music’. In this concerto the horns are equal partners with the other soloists: three oboes, bassoon and the violino piccolo. The part for this last-mentioned instrument (a somewhat smaller violin tuned a minor third higher) was added in a later version of the work. The third movement (allegro), like the second, in which the violino piccolo plays a richly soloistic role, was also composed at a later date. Furthermore, a Polonaise, a dance-form that was gaining in popularity at the time, was added after the original close. In short, Bach com- bined in this work the three-movement concerto form with that of a short suite.

The SECOND Brandenburg Concerto employs a group of four equally prominent soloists. In this heterogeneous concertino, consisting of violin, recorder, oboe and trumpet, the trumpet part merits special mention for seldom before had the instrument been employed with such virtuosity. While in the first movement the four solo instruments converse as a group of individuals, presenting the various motifs in alternation with each other, the strands of the recorder, oboe, violin and continuo parts in the slow movement are finely interwoven to act as a single instrument. In the third movement, the entrance of the trumpet draws again attention to the special place of this instrument in the solo group.

The THIRD Brandenburg Concerto is a true concerto for strings: three groups of three violins, three violas and three cellos with basso continuo, are presented in the first movement as equal partners. The various motifs are sounded in solos by all the parts. This concerto is singular in that it lacks a middle movement, the first and last movements being joined by a mere two chords. With its virtuoso and exuberantly furious sixteenth-note passages, the last movement stands in stark contrast to the more introverted first movement.

Virtuosity reigns supreme in the FOURTH Brandenburg Concerto, whose ensemble of soloists comprises two recorders and a violin. Unlike the previous concertos, here the concertino is divided: the violin part is independent of that of the two recorders. In the score, Bach refers to these two later instruments as due Fiauti d’Echo. This is probably in reference to their role in the second movement in which they interject small echoes interrupting the melody. In order to realize this effect it is necessary that the recorders be positioned at a distance from the orchestra, thus enhancing the exciting spatial effect in their dialogue with the orchestra. The recorder, an instrument which was then considered the conveyor of a pastoral, erotic atmosphere, is the perfect instrument a for this echo effect, something which in this work is could be seen as a symbol for unrequited love.

Of the FIFTH Brandenburg Concerto, like the First, a Frühfassung has survived. One notable difference between the two versions, however, is that 65 measures have been added to the harpsichord’s solo cadenza. This is the first lengthy, fully notated solo cadenza in music history. Although the flute and violin also participate in the concertino, because of the great independence shown by the harpsichord this concerto has more the nature of a harpsichord concerto. Still, the equality between the harpsichord and other solo instruments seems reaffirmed in the slow movement for the cello does not participate in the basso continuo. The extraordinary virtuosity of the harpsichord part and cadenza must be seen as Bach adding his personal signature to the work.

The SIXTH Brandenburg Concerto is scored exclusively for low strings divided into two groups: two violas with cello, and two viola da gambas with double bass. Johann Mattheson, a contemporary of Bach, characterized B-flat major, the key of this work, as being ‘sehr divertissant und prachtig’ [highly amusing and exquisite]. Indeed, the extreme contrast between the lovely melodic strains of the violas and the pounding accompaniment of the other voices does indeed give rise to a smile. The viola da gambas are silenced in the slow movement, there where the violas attain their highest expressiveness. The last movement, in contrast, blusters with the virtuosity of the two violas and the cello.

For this performance of the Brandenburg Concertos we have sought to effect a compromise between the Mendelssohnian approach to earlier music, particularly that of Bach (Mendelssohn attempted to ‘bring up to date’ early music for the listener of his day), and at the same time to take account of the advances made in authentic performance practice. Additionally, both the ensemble and recording engineers made every effort to give this recording the character of a live performance.