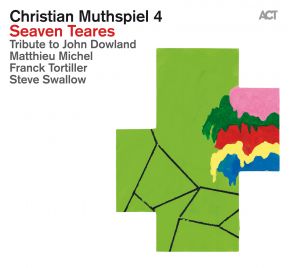 Classical music versus jazz. A rigid distinction between composed and improvised music is not only wrong, but also pointless. Improvisation has always been a part of classical music – from baroque to Mozart, although the high esteem of the interpretation in romantic tradition distorted this fact. Similarly, composition and arrangement have always been parts of jazz. Fortunately, in recent years this artificial gap has been overcome by several musicians of both genres. Austrian trombonist, pianist, composer and conductor Christian Muthspiel, who converts the master of English Renaissance music John Dowland (1563-1626) to jazz on his ACT debut “Seaven Teares”, also confirms this fact: “The parallels that become apparent between both styles and eras indicate how significant improvisation is for Dowland’s music.”

Christian Muthspie and his younger brother, the star guitarist Wolfgang, grew up with a wide spectrum of music and their father, Kurt Muthspiel, was a choir leader, music educator and composer. In addition to Alpine folk music, Christian’s passion was Renaissance choir music. Christian started playing the piano and trombone and continued studying the instruments at the University for Music Graz, however the atmosphere was not what the multitalented musician was looking for and he decided to drop out. In the mid-eighties he felt more at home in crossover projects such as “Orchesterforum Graz”, which he co-founded. From then on he was renowned in European jazz as a solo artist, in a duo with his brother, with his own trio and as a member of the Vienna Art Orchestra (from 1995 to 2004). At the same time, he composed for classical orchestras and for theatre as well as exploring genres from Jandl interpretations to contemporary classical music, also as a composer, and in recent years, a painter.

With a top-class international sextet he converted the folk songs his father had collected into new symphonic music. Frankfurt Allgemeine Newspaper gave the project its “highest respect”. Two of his colleagues from that sextet, who Muthspiel knows from the Vienna Art Orchestra, have joined in on “Seven Teares”. His wish was to find musicians who “are at home in the worlds of both composed music as well as improvisation and jazz.” This is true for the Swiss trumpeter Matthieu Michel as well as for the French vibraphonist Franck Tortiller who, amongst other things, became famous as the director of the Orchestre National du Jazz. And naturally also for the fourth man in the team, Steve Swallow, who is not only the grand old man of electric bass and has played with almost all US jazz stars, but also an acclaimed composer.

Together they start a fascinating journey along ten songs of Dowland’s ingenious instrumental cycle “Lachrimae, or Seven Teares”. The compositional metamorphoses of the compendium of tears from “Tears of Love” and “Bitter Tears” to “Crocodile Tears” are thematically similar to the original. According to Muthspiel the challenge is “to modify the very specific form of melody and harmony resulting from it, interpret it and transfer it into another context”. The result, however, is much more fun: “Happy Tears” begins with a flute theme before electric piano, vibraphone and muted trumpet join in, the bebop ballad “Endless Tears” or the brass driven “Dancing Tears” with New Orleans Growl.