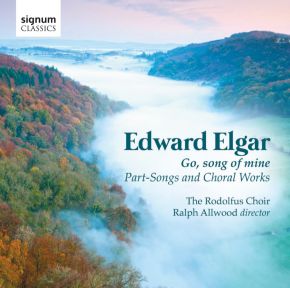 Go, song of mine

Drawn from across the composer's lengthy career, this collection of Part-Songs and Choral Works explores the great variety and range within Elgar's work for choir and voices. Along with more well-known works such as Love and Deep in my Soul there are early pieces such as O Salutaris hostia (composed for small amateur choirs) that give hints of his later mature style, through to the 1928 piece I sing the Birth – a work that shows Elgar's ability to adapt to more contemporary styles of 20th-century choral composition.

The Rodolfus Choir have established themselves as one of the leading youth choirs in Britain, made up of singers aged from 16 to 25 who have been chosen from past and present members of the Eton Choral Courses for prospective choral scholars. Many members of the Choir are choral scholars, some are at music college, and most hope to make a career in music. The Rodolfus Choir and Ralph Allwood are well-known for imaginative programming, and for presenting new music.