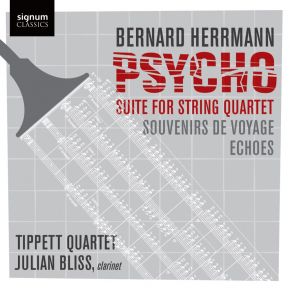 Bernard Herrmann was perhaps one of the greatest musical all-rounders of the 20th Century. Although he is best known for his scores to perhaps some of the most iconic films ever made ('Vertigo', 'Citizen Kane', 'Psycho'), he was also a talented composer for the concert hall, with an early career marked out by his skill as a conductor - praised by Stravinsky amongst others, who autographed Hermann's score for his Symphony in 3 Movements with "To the excellent musician and conductor, Bernard Herrmann. Cordially, I. Stravinsky." The Tippett Quartet capture the energy and musical finesse of Herrmann's works in this recording, accompanied for Souvernirs de Voyage by the clarinetist Julian Bliss and featuring a new arrangement of his score for 'Psycho'.