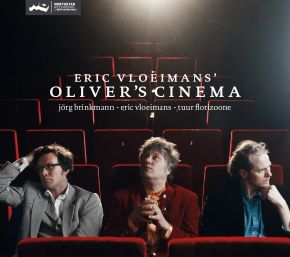 How Oliver’s Cinema came about

"I used to think the accordion was a horrible instrument. An ugly, kitschy sound and a repertoire to match, from commercial tripe and oompah to waltzes for the elderly and circus drollery. In short, music to be given a wide berth. But developments never cease, and you suddenly notice that your opinion has changed. After years and years of studying music, mind you. Your taste buds change. It’s just like with buttermilk, olives and tomatoes. As a child you hated them, and now you find you enjoy the taste. After thorough education at the dinner table, by the way. Trying a little bit, time and again.

Incidentally, there are plenty of listeners who feel that mine is a horrible instrument. Loud, shrill, ugly, militaristic. Think of the Brouwer Brothers, Willy Schobben, Marty and all those other guys with their Golden Trumpets, playing Il Silencio and O mein Papa. I used to like that, but not anymore. Yes, taste remains a complex business.

Back to the accordion. During one of my musical wanderings I wound up in the Belgian town of Rijkevorsel. After a concert there I was having a pint at the bar, and in this lovely Belgian atmosphere the accordion question reared its head again. Was there no accordion player to be found in Belgium that would suit me? ‘But certainly’, the response was, ‘you want our Tuur, then!’ A CD of his was put on forthwith, and the wonderful improvisations by Tuur Florizoone enchanted me on the spot. An appointment with Tuur was quickly made. One phone call, and it was like meeting my brother. This was the beginning of a new duo, that by now can look back on a long series of successful concerts.

There’s another instrument I’m completely in love with – the cello. A sensual instrument, that can take over the task of a bass, but remains light and svelte. A bowed melody on the cello sounds gorgeous, like on a heavier viola, but still agile and pert. And now I’m not only a fan of the instrument, but also of someone who plays it magnificently. He knows his classics, plucks like a jazz virtuoso, bows like a prince, and doesn’t shy away from electronics either. He’s from our neighboring country Germany, and his name is Jörg Brinkmann.

Can you imagine the glorious music the meeting between Tuur and Jörg would produce? The thought wouldn’t let go of me. The first occasion that presented itself was a concert at a beautiful open air theatre in Kersouwe, Brabant. Everyone brought their sheet music, we rehearsed right there for two hours, and then went on stage straight away – you can discover the greatest things when you’re put on the spot.

Tuur brought the music he’d written for a documentary about mussels, l’Amour des Moules. Jörg came up with Fellini’s Waltz, and my contribution consisted of music I’d composed for Majesteit, and the themes from the movies Rosemary’s Baby and Cinema Paradiso. Without any conferring beforehand, this all came together wonderfully. A great gift, as was the performance that turned out fantastically well. I gained another brother on the spot ☺and a new trio was born right there and then.

How do you find a name for a new trio? After much brainstorming, I fooled around with anagrams. And you guessed it, another great gift: Eric Vloeimans = Oliver’s Cinema."

Eric Vloeimans (artist)More information
Tuur Florizoone (artist)More information
Jörg Brinkmann (artist)More information
15-10-2014 all about jazz
""On the aural end, it should simply be noted that Eric Vloeimans' Oliver's Cinema creates beautiful and heartfelt music that touches the soul""
28-07-2014 Jazzflits
"Only three musicians, who where able to get two thousand people noiseless (Jazzflits over the concert of Oliver's Cinema on Norht Sea Jazz Festival 2014)"
04-05-2014 Written in Music
"Very successful album!"
01-03-2014 Jazzpodium
"An outstandig project, you should listen to at rest."
01-01-2014 Blogspot
"It’s as if these tones don’t just touch your hearing, but every one of your senses."
16-12-2013 Jazzflits
"With their brand new but nostalgic sounding music they had an effortless full house "
06-12-2013 keepitswinging.blogspot.nl
""An album that will surprise and moreish and will fascinate a large group of musiclovers. Beautiful!""
29-11-2013 www.rootstime.be
""A special CD, full of atmosphere""
18-11-2013 www.musicframes.nl
""The result is thrilling music with a lot in mind: it’s exciting, adventurous and varied""
18-11-2013 www.nadelunch.com
""If there is a musician who is not suffering from a parochialism, is it jazz trumpeter Eric Vloeimans. Recently, two phenomenally beautiful albums were released on which he can be heard with a baroque orchestra, respectively, and in trio with accordion and cello""
15-11-2013 Nederlands Dagblad
""The accordion adds a distinctive French twist, the cello picks and strikes and Eric Vloeimans' trumpet sounds always beautiful""
31-10-2013 Draai Om Je Oren
"This CD is made with lots of love and attention. There is an atmosphere of peace that sometimes can be interpret as alsmost silence. Music with a rich palette of sound and beauty, which can encourage to contemplate."
14-10-2013 Jazzflits
"Everything is right about this album"
08-10-2013 www.opusklassiek.nl
""In one word Brilliant""
30-09-2013 Limburgs Dagblad
"Genre boundaries do not exist. Impossible combinations do not exist either. "
23-09-2013 De Volkskrant
"4-star review ****
"The timbre of the cello and accordion contain colors that evoke nostalgic warmth and sadness, but also a fine hint of hope. Together with Vloeimans' long, hot fire trumpet sounds, the cinematic grandeur of Oliver's Cinema is complete.""

19-09-2013 Jazzbulletin
""The occupation is special, with cellist Jörg Brinkmann and flamboyant accordionist Tuur Florizoone, particularly popular in his country Flanders""