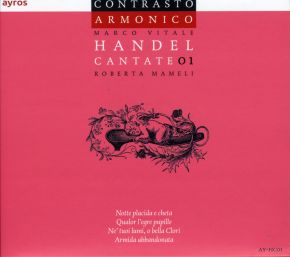 This project is the continuation of the ‘Handel Complete Cantatas’ series appeared recently on the market with four volumes issued. This is the first volume presented by the ayros recording label, as continuation of the series . This CD features the great soprano Roberta Mameli, an acclaimed specialist of the Handel repertoire and it includes the wonderful cantatas “Notte placida e cheta” and “Armida abbandonata”.