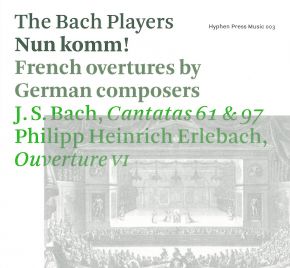 The Bach Players explore the form of the French overture in two cantatas by J.S. Bach: the thrilling Advent cantata ‘Nun komm der Heiden Heiland’ (BWV 61), from his Weimar years, and ‘In allen meinen Taten’ (BWV 97) from his later years in Leipzig. They play a dance suite by Philipp Heinrich Erlebach, opening with another French overture. To complete the disc, Heinrich Isaac’s beautiful ‘Innsbruck ich muß dich lassen’, which provides the choral melody for cantata 97, is sung a capella, and is played in two instrumental settings.