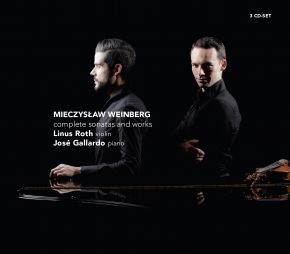 A special project: Linus Roth and José Gallardo are the first to interpret Weinberg’s sonatas and works for violin and piano in a complete anthology!

Mieczysław Weinberg had an unbelievably tragic life, full of struggle and pain. As a Polish Jewish composer he flee from the Nazi regime to Russia, got imprisoned by Stalin and was saved at the last minute by his good friend and colleague Dmitri Shostakovich. He lost all his family members in concentration camps. Weinberg's compositions, often with a Jewish slant, were prohibited…

Noted German violinist Linus Roth and the Argentinean piano virtuoso José Gallardo feel a lot of compassion for this composer. It's all there in his beautiful and deeply emotional music where Weinberg put so much of his soul. As a great master of contrasts he goes from very dark, to very bright, from a fortissimo when you think the world breaks into pieces, to a pianissimo you can barely hear. In one bar there can be hope, and in the next bar: no hope!

Linus and José feel obliged and honored to be advocates for Weinberg because they think his music deserves it! Now it was time for them to record the "Complete Sonatas and Works" for violin and piano of Weinberg on a 3CD. This has never been done before! Weinberg’s repertoire has always been only partially performed and recorded, but never as complete collection. The Sonatas Nr. 2 and 6. are even never recorded before and the Rhapsody on Moldavian Themes is the only one available recording right now - it was once recorded around 40 years ago, but the vinyl is not available to buy any more.

Dear Ulrike, The booklet has been send to you by mail! Kind Regards, Challenge Records Team

Dear Challenge Records Team, would you please be so nice and send me also a PDF of the CD Booklet? It got lost ... Thanks a lot! All the best Ulrike

Dear Jim, The booklet has been send to you by mail!

I purchased this wonderful set on CD last year (13th April 2017, order number CHAL-17322). I am now in the process of ripping my CDs to computer and wonder if the included booklet is available as a PDF. If so, I would dearly love to have a copy, since my scanner does produces results which are very disappointing. I searched your area at nativedsd.com. They provide PDF booklets for Linus Roth's set of the Weinberg sonatas for solo violin and for his recording of the Weinberg and Britten violin concertos, but do not offer the 3-CD set of Weinberg's complete works for violin and piano (and hence no booklet). I will be forever in your debt if you can help me with this. Jim MacCormaic Dublin, Ireland

Dear Christopher, The booklet has been send to you by mail!

I spilled coffee over the notes to the complete Violin Sonatas of Weinberg: is it possible, please, that you might let me have another copy? I am perfectly happy to pay for it. Thank you.

Mieczysław Weinberg (composer)More information
14-11-2015 Het Parool
""The German violinist Linus Roth and the Argentine pianist José Gallardo bring his complete works for violin and piano.""
06-11-2013 The Strad
"Not an easy listening experience by any means, but a profoundly moving one."
30-09-2013 Luister
"Roth and Gallardo overwhelmed the audience."
01-09-2013 Fono Forum
"It's definately worth listening"
29-08-2013 Klassik Heute
"The result is a dedicated hommage to Mieczyslaw Weinberg with technical and musical accomplishment."
27-08-2013 www.classicalmusicforyou.com
""The intelligent interpretations and general accessibility of these works, is sure to win many new fans and admirers.""
08-08-2013 NRC Handelsblad
"Roth and Gallardo control Weinberg lyricism and melancholy into the capillaries."
04-08-2013 L'Orfeo
"Artist of the month"
01-08-2013 ensemble
"Roth and Galardo play these compositions so striking, evident and  internalized that following artists will have to compete with this recording."
28-05-2013 Süddeutsche Zeitung
"Discovery"
04-04-2013 Lines that have escaped destruction
"
The performances of both artists are virtuosic and commendable, while the recording quality is generally excellent  "

04-04-2013 linesthathaveescapeddestruction
"Altogether, then, these discs are remarkable. The performances of both artists are virtuosic and commendable, while the recording quality is generally excellent "
crescendo
"Linus Roth and José Gallardo perform Weinberg's music with verve, passion and enthusiasm."