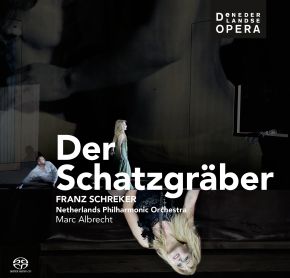 Franz Schreker (1878-1934, austrian composer) was born in Monaco and grew up during travels across half of Europe and, after the early death of his father, the family moved to Vienna (1888) where in 1892, with the help of a scholarship, Schreker entered the Vienna Conservatory. Starting with violin studies, with Sigismund Bachrich and Arnold Rosé, he moved into the composition class of Robert Fuchs, graduating as a composer in 1900.

Schreker is well known for his operas and worte the libretto and composed his opera "Der Schatzgräber" after the great success of "Der ferne Klang" (1912) and "Die Gezeichneten" (1918). "Der Schatzgräber", questioning the value of materialism versus love, was to prove particularly powerful in post-War Europe. After the Frankfurt premiere in January 1920, productions popped up in major cities across the continent and Schreker became one of the most performed composers of his generation. While his biggest competition Richard Strauss and Hugo von Hofmannsthal had pursued a similar path in the overtly Wagnerian "Die Frau ohne Schatten" – which opened in Vienna on 10 October 1919 – their ‘last Romantic opera’ lacked Schreker’s allegorical punch. Strauss retreated further into Gemütlichkeit, while Schreker continued to wrestle with the dilemma of being an artist in the modern world.

Synopsis
The opera is set in legendary medieval times. The queen has lost her jewels, and with them her beauty and fertility. The fool knows about Elis, a wandering minstrel whose magic lute points out all hidden treasures to him. The king promises the fool that he will be allowed to choose a wife as a reward, if Ellis can find the jewels.

Els, daughter of the innkeeper, has to marry a brutal but rich young nobleman she despises. She therefore sends him away to find the queen's jewels, and has him murdered by Albi, her servant. The minstrel Elis presents Els with an ornament he has found in the woods. Els falls in love with the young minstrel, but then the body of the dead nobleman is found in the woods; the bailiff, who wants Els for himself, arrests Elis on suspicion of murder.

Elis is to be hanged. Els seeks the advice of the fool, who promises to help. The king's messenger stops the execution at the last moment, so Elis can go in search of the ornament. To avoid being exposed, Els orders Albi to steal the minstrel's magic lute.
During a night of love, Els shows herself to Elis in the full beauty of the jewels. She hands over the jewellery to him, on condition that he will never ask her about the provenance, and will always trust her.

Elis has returned the jewels to the queen. During a celebration, the bailiff intervenes and announces that Albi has confessed to the murder. Els is denounced as the instigator of the murder, and the bailiff demands her immediate execution. But the fool reminds the king of his promise: he chooses Els as his wife and thus saves her from being executed.

One year later, Els is dying. Only the fool has remained with her. He fetches the minstrel, who sings his most beautiful ballad for Els. She dies in the minstrel's arms.

Having just read the Gramophone Magazine review, I would like to have this recording in my collection but without an English translation, I will not do so. A shame!

Are there in any cuts in this recording, or is it the complete original Schreker score?

@ A. Linkner: Unfortunately, we do not have the English translation. But we are glad to hear you are enjoying the cd.

I\'ve now listened to the recording and the performances and sound quality are stunningly good.

I received this new recording of this opera only to find no translation of the libretto into English. Since I don\'t speak German, this is a big problem. Is there any way of getting a translation of this?

Dear Kevin, this release is scheduled for early September.

Hello, Do you have a release date for this recording?

03-02-2014 Luister
"Der Schatzgräber finds its preliminary climax in this impressive DNO recording and exceeds the Capriccio recording from 1989"
01-02-2014 hifi&records
"The live-recording of this hit from 1920 is impressive, because Marc Albrecht's conducting is giving Schreker's musical language of heated appealing-harmonic and pseudo-archaic-late-romanticism enough room and is sensual despite its structual clarity."
23-01-2014 www.musicweb-international.com
""If you are a fan of opera on record from any period this is a treat, but if you love your music-dramas exciting, moving and Romantic with a big-boned ‘R’ then this is one you will want to keep close to your SACD sound reproduction unit for a long time to come""
04-01-2014 Financial Times
"Albrecht conducts with clarity and impreccable taste."
01-01-2014 Das Opernglas
"subtle conducting"
01-01-2014 Opernwelt
"There's lightning and glisten, glow and die-aways, cutting and nestleing, it's a pleasure and you ask yourself seriously, why this composition is so seldom heard.
"

01-01-2014 Music Web International
"(...) this is one of those operas and recordings which "has it all", from drama and sublime beauty of the music to the glorious performance and sumptuous recording."
03-11-2013 www.opusklassiek.nl
""A true jewel is the realized sound of this recording by producer Lodewijk Collette, which is recorded excellent by Challenge on CD. The simple but well-prepared presentation (with a Dutch explanation) is an aesthetic pleasure""
23-10-2013 www.operamagazine.nl
""One year ago, Der Schatzgräber from Franz Schreker at the Dutch Opera was musically a hit""