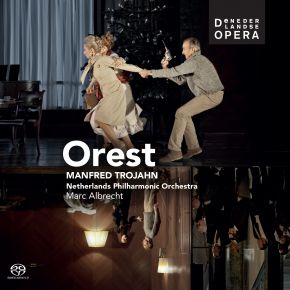 Manfred Trojahn’s Orest enjoyed its world premiere in Amsterdam amid spectacular splashes of gore and commensurate splatters of sound.

The Netherlands Opera commissioned Trojahn’s sixth opera to end a series that has focused on the House of Atreus, rounding off the cycle of violence by adding the murder of Helen of Troy to the carnage surrounding Iphigenie, Idomeneo and Elektra.

Trojahn has written his own libretto, based on Euripides and is narrative follows the Greek story closely, but he skirts around Apollo’s apotheosis of Helen, preferring to leave behind a pool of blood and a number of open questions.

Perhaps the subject matter, with its myriad musical and literary allusions, steered Trojahn towards a harmonic language more rooted in the past than he might otherwise have adopted. Certainly Strauss’s influence is amply audible.

Dietrich Henschel (soloist)More information
Johannes Chum (soloist)More information
Sarah Castle (soloist)More information
Romy Petrick (soloist)More information
Rosemary Joshua (soloist)More information
Finnur Bjarnason (soloist)More information
07-09-2015 NRC Handelsblad
""First there is chaos, then soft lyrics. An enormous effect.""
03-08-2014 Opus Klassiek
""The musical-culture that they offer is of international high level. To be very proud of""
01-08-2014 Opera
"The many pages of colour photos (in the booklet) confirm what the audio-only experience so forcefully suggests: that this remarkable work now urgently deserves also to be released on DVD."
01-05-2014 BBC Music Magazine
"With bass-baritone Dietrich Henschel inhabiting the part with total, sometimes terrifying conviction, and electrifying conducting Marc Albrecht, this live recording from the premiere run of the piece in 2011 amply proves why Opernwelt magazine picked Orest as its 'Premiere of the Year'."
01-04-2014 Opera Now
"Marc Albrecht's conducting is concise and exciting."
01-03-2014 Opernwelt
"For this music, which refers to the old and dares the new, is Marc Albrecht a bright and determined mediator."
17-02-2014 Pizzicato
"Manfred Trojahn’s ‘Orest’ focuses on the guilt feelings of the man who murdered his mother and murders Helena as well, pushed by Elektra, his sister. Marc Albrecht conducts the dramatic music of that tragedy in a terrific performance, with excellent singers, Dietrich Henschel being the most  impressive one in a role that reminds his Wozzeck performances, one of Henschels’ principal roles."
01-02-2014 Das Opernglas
"healthy portion of drama"
01-02-2014 Fono Forum
"Without doubt on this recording you can listent to emphatically singing - in a very beautiful way!"
31-01-2014 The Guardian
"The impact is impressive, especially in this terric performance under Marc Albrecht"