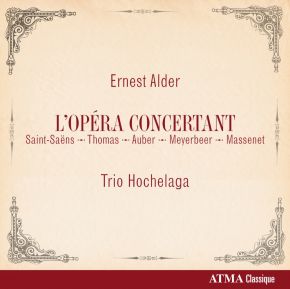 Trio Hochelaga has become interested in the Swiss composer and conductor Ernest Alder (1853-1904). Now a forgotten figure in the history of music, Alder was once considered “a distinguished musician, known especially for his many clever arrangements for string quartets”. He wrote graceful musique de salon for piano, as well as choral and orchestral works, but it is as an arranger – especially of Romantic operas –that he is being rediscovered today. The trio arrangements on this disc are of arias from classic 19th-century French operas.