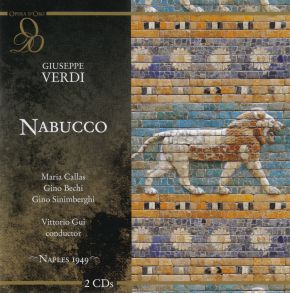 “Callas’ Naples Nabucco ... great singing, excitement ... the huge two-octave runs are breathtaking; the passion, power, and rage palpable;  and an optinal high E-flat at the close of the duet with Nabucco (the estimalble Gino Bechi) is hair-raising...self-recommending if you adore Callas. It’s part of the picture of who she was on the way to becoming who she wound up being.” — ClassicsToday

Live performance, Naples, December 29, 1949. Nabucco, the king of Babylon, goes mad after proclaiming himself a god. While he is imprisoned, the slave girl Abigaille seizes his throne and condemns his daughter Fenena to death. When Nabucco sees Fenena being led to execution, he regains his senses, accepts the god of the Hebrews, and is freed and made king of Judah.