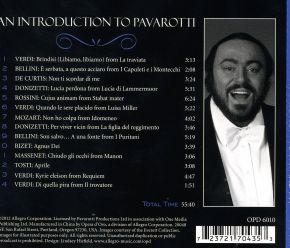 An Introduction to Pavarotti

Music from Verdi, Bellini, Donizetti, De Curtis, Mozart, Massenet and Tosti
Although famous for his starring roles in the most familiar operas of Verdi and Puccini, Luciano Pavarotti had a wide range of repertoire outside opera. This disc gives an introduction to the great tenor in a range of roles and genres.
Verdi is featured with the lyrical aria from Luisa Miller, the opening ensemble from La traviata, his blending in the Kyrie Eleison from the Requiem, and the way in which he could bring down the house with an aria sung in recital to piano accompaniment (“Di quella pira”). His mastery of the “bel canto” style of Italian singing is showcased in Bellini’s operas I Capuleti e i Montecchi and I Puritani, Donizetti’s Lucia di Lammermoor and La figlia del reggimento, and Rossini’s stirring Stabat Mater.
The gorgeous Italian tradition of Neapolitan song is heard in Pavarotti’s interpretations of “Non ti scordar di me” (“Don’t Forget Me”) and Tosti’s “Aprile.” Pavarotti surprised the opera world by his successful forays into Mozart in the opera Idomeneo and Massenet’s French opera Manon. Finally, his moving way with religious music is shown in Bizet’s “Agnus Dei.”