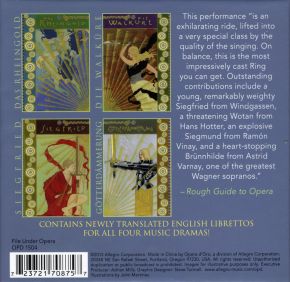 Wagner performances recorded in Wagner’s own theater in Bayreuth, Germany always have a special appeal due to the unique acoustics, which Wagner took into account when composing. His music dramas just seem to sound better there than anywhere else. This recording caused a commotion when it came out in 1953 due to its palpable excitement in comparison to the relative sedateness of previous recorded performances. Clemens Krauss was one of the great Wagner conductors (and a personal friend of Richard Strauss), but what really sets this recording apart is the cast. Overall, it is arguably the greatest cast assembled for Der Ring at Bayreuth in the last 60 years. Although the great bass-baritone Hans Hotter sang Wotan in the Solti Ring years later, here his voice is in far better condition. Wolfgang Windgassen as Siegfried is also much more youthful. Astrid Varnay was one of the outstanding Brünnhildes of all time, and the other singers are equally fine. Even small parts are taken by major singers of the era, such as the famed coloratura Rita Streich as the Forest Bird. The sonics on this set, although monophonic and not up to modern standards, are quite acceptable and have been digitally remastered. A magnificent set including plot synopsis and track listings, absolutely essential to the serious opera lover, especially the Wagner fan and Ring aficionado! Live performance, Bayreuth Festspielhaus, 1953.