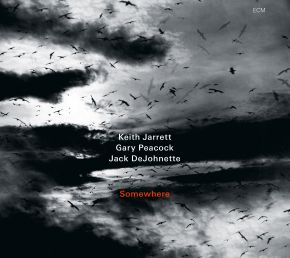 “This formation remains one of the best, not just of this, but of all times,” wrote Jürg Meier, reviewing the Luzern concert of Jarrett/Peacock/DeJohnette in the Neue Zürcher Zeitung. “Their engagement with the Great American Songbook, the standards of jazz, is exemplary in the simultaneity of absolute respect for the material and absolute freedom in dealing with it.“

The Luzern set (recorded July 2009) finds Jarrett, Peacock and DeJohnette improvising on some celestial themes. The entry point, Jarrett’s solo meditation “Deep Space”, already breathes the air of another planet, and opens up a flight path for Miles Davis’ “Solar”. That blues-drenched standard, historically famous in the interpretations on Miles’s “Walkin’” and Bill Evans’ “Sunday At The Village Vanguard”, has been a favourite vehicle for the trio. Endlessly manoeuvrable in the hands of these players, it has suggested a sphere of emotion to negotiate, as well as a point of departure for new music. While there are several earlier recorded versions in the trio’s discography (including on “Tribute”, and the “Live in Japan 93/96” DVD): the Luzern version may be the most satisfying yet, exhilarating from the outset.

“Stars Fell On Alabama”, one of the few ballads about meteor showers, follows. Beautifully delivered in the past by artists from Billie Holiday to Cannonball and Coltrane, Jarrett’s shimmering interpretation has the stars falling in slow motion. Not everything adheres to the freely-associative empyrean lyrical subtext: Harold Arlen’s “Between The Devil And The Deep Blue Sea” looks in the opposite direction, with a stoical good humour that acknowledges Thelonious Monk’s take on this great tune first popularized by Cab Calloway and by Louis Armstrong.

A version of Leonard Bernstein’s “Somewhere” from “West Side Story” evokes a world of peace and quiet and open air which Jarrett, Peacock and DeJohnette explore until they cross into new territory, with an “Everywhere” like a tribal dance: classic Jarrett ritual music which would not have been out of place on the “Changeless” album. The Neue Zürcher Zeitung spoke of kontrollierter Ekstase – controlled ecstasy – to describe its ostinato-driven pulses. There is more Bernstein in a dancing version of “Tonight”, another song concerned with celestial signs, bright shining moons, and an absence of morning stars.

The closing encore “I Thought About You” makes an arc back to the Miles Davis references at the beginning. Miles played this on “Someday My Prince Will Come”, and it was in the Davis band book for years. Keith, Gary and Jack recorded it previously when paying tribute to Miles on “Bye Bye Blackbird”. The tune’s lyrics, by Johnny Mercer, famously written on a Chicago-bound train itemize the view from a carriage window: “Two or three cars parked under the stars / A winding stream / Moon shining down on some little town...”

The album “Somewhere” is issued in the thirtieth year of the “Standards” project. How do they keep it so fresh? Gary Peacock addressed the question in a Down Beat interview: “We don’t bother with concepts, or theory, or maintaining some image. That’s of no concern whatsoever. So what that leaves is everything.

Keith Jarrett (artist)More information
Gary Peacock (artist)More information
Jack DeJohnette (artist)More information
09-09-2013 www.jazzflits.nl
""The absolute highlight of the album is the twenty minutes combination of 'Somewhere' of Bernstein and Jarrett's own 'Everywhere''"
05-08-2013 Piano Wereld
"It is (almost) always a live recording of a concert that meets with the approval of the greatest jazz pianist of our day."
01-08-2013 villla d'Arte
"Highlight: Jimmy van Heusens "I Thought About You." Where earlyer came contagious Brazillian lounge, this is catchy jazz lounge from the highest order. "
12-07-2013 Nederlands Dagblad
"'Somewhere' and 'Tonight' ... are not only melody wise interesting, they enable the three experienced musicians to reach great heights with their interplay"
01-07-2013 Music Frames
"A CD for Anywhere and at Any Time: timeless!"
21-06-2013 Jazzenzo
"Keith Jarrett is a master at plotting melodies. Beautiful multilayered different intensities feature his technical skills."
17-06-2013 Slagwerkkrant juli/aug 2013
"Illustrious jazz trio. Great attuned. Sophisticated drumming.
"

17-06-2013 De Standaard
"… the trio showed the example to other jazzbands, and with this sparkling recording makes it clear why…”"
14-06-2013 L'avenir
""...this fabulous pianist Keith Jarrett makes music sound like nobody does”! If some are a little tired of these regular publications, it is clear that the heart is still in this trio and sources of inspiration are endless.""
08-06-2013 De Standaard
"… the trio sets the example to jazzbands, and with this sparkling recording it is clear why that is…”
"

07-06-2013 Platomania
"Breathtaking renditions of jazz standards.
The sound quality is impressive, as we are used to from ECM."

29-05-2013 Knack Focus
"4star-review: Each of their concerts is a high mass itself. This aniversary album was recorded in July 2009 in Lucerne."