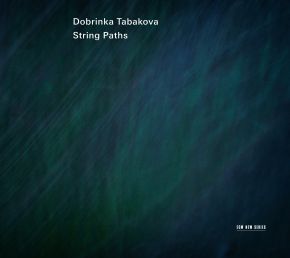 ECM New Series presents the first full album devoted to the music of Dobrinka Tabakova, a composer born in Bulgaria in 1980 but raised from a young age in London and educated there. In Tabakova’s music – richly melodic, texturally sensuous, often emotionally radiant – there resides the new and the familiar, or rather the familiar within the new, and vice versa; there are the spirits of East and West coursing through the pieces, usually hand in hand; and just as the composer’s technical virtuosity is apparent, she possesses a desire, and a talent, for direct communication that can be heard in virtually every measure. The recording features Tabakova’s Concerto for Cello and Strings, plus the Rameau-channelling Suite in Old Style for viola and chamber orchestra. Then there are three chamber works: the string trio Insight, the string septet Such Different Paths and a trio for violin, accordion and double-bass, Frozen River Flows. The performers include violinist Janine Jansen and several of Tabakova’s former conservatory colleagues: violinist Roman Mints, violist-conductor Maxim Rysanov and cellist Kristina Blaumane, principal with the London Philharmonic Orchestra.

Tabakova’s music has a particularly 21st-century feel for its broad palette – its free mix of tonality and modality, of folk-music influence and the example of past masters. Her ECM debut came about after a happenstance meeting of the composer with label founder-producer Manfred Eicher at the Lockenhaus Festival in Austria, where Rysanov was performing Tabakova’s Suite in Old Style (part of a triptych of suites she has written for him, along with a concerto). The resulting album presents Tabakova works from 2002 through 2008.