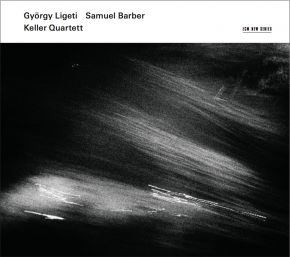 An album that bridges musical worlds, with the Molto Adagio of Samuel Barber’s String Quartet No. 1 offered as tonal terra firma between György Ligeti’s restlessly shifting first and second quartets. Mid-20th century, Barber and Ligeti would have been considered aesthetic opposites. “Ligeti was all about leaving what for Barber was solid home”, Paul Griffiths notes in the liner text. From a contemporary perspective both composers are voices from the past, their present-day relevance emphasised in these committed performances.

“Physically actualized in the recording, the music is being all the time remade by the performers searching for what a motif can convey and finding an abundance of expressive contours in Ligeti’s quartets as much as in Barber’s. The gesture of lament is common to both.” The first of the recordings heard on this album was made in 2007 on the first anniversary of Ligeti’s death, Hungary’s foremost string quartet paying tribute to the great innovator of modern Hungarian music. The 2011 recording of the second Ligeti quartet documents also a change in the line-up of András Keller’s ensemble, with Zsófia Környei, widely considered one of the outstanding violinists of her generation, replacing long-serving Keller Quartett member János Pilz.

György Ligeti (composer)More information
12-11-2013 NRC Handelsblad
""Both the performances and the recording quality are excellent""
18-10-2013 www.opusklassiek.nl
""The Keller Quartett goes to the bottom of these scores, there is no way a play would be shunned over, not in the merciless non-vibrato Barbers Adagio, and neither the ethereal harmonics of Ligeti's creation. In that respect, they make their point - two hundred percent. The stunning recording does the rest""
12-09-2013 www.musicframes.nl
""The Keller Quartett plays Ligeti with a natural significant way. They put the melody and harmony in the center of the music""