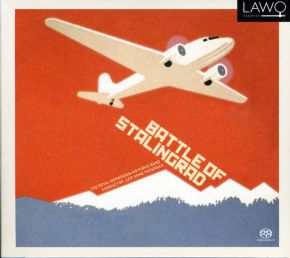 With the release of the Royal Norwegian Air Force Band’s new album featuring Russian music for wind instruments, the scene is set for a compelling musical experience. Bearing the title “The Battle of Stalingrad”, the recording offers the listener works of some of the most prominent early Soviet composers from a time when Europe was divided by the Iron Curtain. Even today we can take pleasure in the virtuosity and power of these compositions — classic, immortal works that stir our feelings.

The idea for the recording stems from the band’s hugely popular concert production in Trondheim in the autumn of 2011, and at the Nordland Music Festival 2012, with the Battle of Stalingrad as its theme. Besides lavish works of Glière and Khatchaturian, who seldom have been recorded, the album includes virtuoso pieces of Kabalevsky and Rimsky-Korsakov.

The Royal Norwegian Air Force Band, one of five professional bands of the Norwegian Armed Forces, has roots dating back to 1818. While the band’s main venue is “Byscenen” in Trondheim’s city centre, it has distinguished itself nationally with its concerts and special events, and it has received a “Spellemannspris” nomination (Norwegian Grammy).

Leif Arne Pedersen took over as principal conductor in 2011. He is principal clarinet of the Oslo Philharmonic Orchestra, and he can be heard on a LAWO Classics release of Mozart and Brahms clarinet quintets