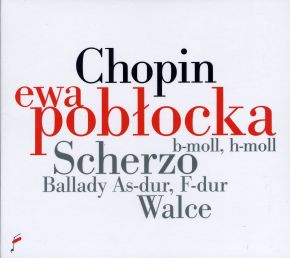 The latest release in the ‘White Series’: selected Chopin's works in the interpretation of Ewa Pobłocka. It is the second album recorded for the Chopin Institute by Pobłocka - one of the fines pianists of her generation. Like the cycle ‘The Real Chopin’, the so-called ‘White Series’ is planned as a complete set of the works of Fryderyk Chopin – but on contemporary instruments.