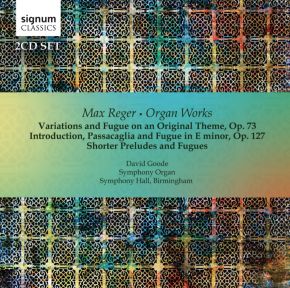 The two major organ works on these discs (his longest for organ) show Max Reger at the height of his powers; not only do they sustain a structural coherence over an impressive span, but they show an almost inexhaustible proliferation of invention. As well as the large-scale Variations and Fugue on an Original Theme and the Introduction Passacaglia and Fugue in E minor, this 2CD set includes a collection shorter preludes and fugues - the Five Easy Preludes and Fugues and two transcriptions of preludes and fugues by JS Bach from the Well-Tempered Clavier.