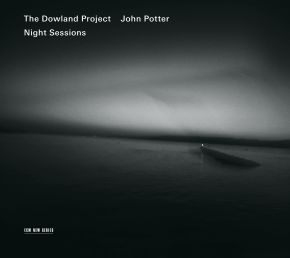 From its inception, John Potter’s Dowland Project has drawn upon different musical traditions, including those of ‘early music’ and improvisation. The Night Sessions album emphasizes the Project’s improvisational flexibility, as the players create new music, sometimes with poetry as inspirational reference and guide. There are also a number of ‘daytime’ pieces worked up, Potter says, from small amounts of notation: ‘Menino Jesus à Lappa’ is based on Portuguese pilgrim song fragments and ‘Theoleptus 22’ built around a Byzantine chant. Lute fantasias are taken from Dalza’s Intabolatura de Lauto (Venice, 1508) and Attaignant’s Tres breve et familiere introduction…a jouer toutes chansons (Paris, 1529). The oldest compositions are ‘Can vei la lauzeta mover’ – a love song by the 12th century troubadour Bernart de Ventadorn, and Fumeux fume by the 14th century avant-gardist Solage. Two incarnations of the Dowland Project are heard here, the original band with Potter, Stephen Stubbs and John Surman joined by Barry Guy and Maya Homburger, and the revised line-up with Miloš Valent on violin and viola. Yet the music, recorded at St. Gerold sessions in 2001 and 2008, reflects a unified sense of purpose.

“The day music is how the Dowland Project usually works” John Potter explains in a liner note. “The night music came about through rather special circumstances. We’d finished recording and were celebrating a very creative couple of days working on the album that became Care-charming sleep. Sometime after midnight, after a very convivial evening, Manfred Eicher suddenly said, ‘let’s go back into the church and record some more...’. Manfred has been the group’s moving spirit since first getting us all together and has been an inspirational participant in all our musical dialogues, so we could hardly say no... but we had run out of music, having already recorded more than would fit onto one album. The moment provided the music: as it happened, I had some medieval poems with me, so we decided to see what we could do with those.”

Potter told some more of the story in his essay in Horizons Touched (Granta, 2007): “What followed was, for me, the most remarkable hour’s music-making I have every experienced. With all inhibitions gone, and the sense that we were creating something absolutely in the moment, we set about realizing some of the poems. I read them out first, to give the players something to go on, then we set off... We did each poem once only, and they ranged from a lullaby improvised over a lilting bass clarinet riff to a loud and violent number with the full band summoning up a fourteenth-century blacksmith at his forge.”

Texts sung on Night Sessions can be found at www.ecmrecords.com