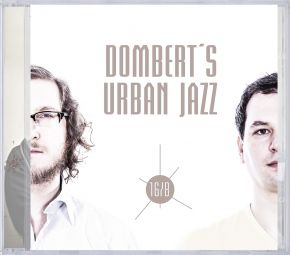 The initial CD of the band headed by Andreas Dombert was released in the series Jazz thing Next Generation ("Chamäleon", DMCHR 71083) three years ago. The press already praised the band at that time: "A convincing look forward!" (Ralph Dombrowski in Audio 8/10). Many concerts later, including a spectacular performance at Jazzfest Bonn, there is now a worthy successor . The Urban Jazz Band continues to pursue its very own, fresh approach. The pulsating, urban whirring sounds are reflected in very varied nuances in their music. Andreas Dombert's sound is clearly rooted in tradition, which produces a fantastic contrast to the avant-garde sounds of sound tinker Peter Sandner aka "Dorsch". The band, to which Lutz Häfner on saxophone, Henning Sieverts on bass and Matthias Meusel on drums belong, has fused to a musical mixture and developed further thanks to many joint performances. There are raging unisono passages between guitar and saxophone, mysterious voices and sounds from laptop and synthesizer, and impressive grooves, but also more peaceful moments full of density and complexity. The connection between modern jazz and electronics succeeds here in an exemplary way, which even succeeds in spellbinding purists, because the samples and soundscapes are integrated and part of a homogeneous whole.

Andreas Dombert, who studied jazz guitar under Helmut Kagerer and Paulo Morello from 2000 to 2004, has already played alongside of legends such as Philip Catherine and Airto Moreira, and his participation in the project "Night of Jazz Guitars" together with Larry Corryell, Helmut Kagerer and Paulo Morello made him known to a large audience. However, his contribution to the metal jazz band Panzerballett also demonstrated that he can do quite different things.

Peter Sandner has been the co-producer of "Dombert's Urban Jazz" since the start. He can call up numerous samples and sounds with his synthesizers and laptop at any time. However, he does not limit himself to that, but instead his sound is an integrated component of the band. His contribution is in context to the musical development; he communicates with the other musicians and improvises live.

T saxophonist Lutz Häfner, Echo prizewinner 2013, is one of the very big names in his field. The press called him an "exceptional musician", one of Germany's "best saxophonists" and writes about his "world-class level". He can look back on numerous successful projects together with Till Brönner or Fanta 4, and has always remained curious and open for stylistic changes.

Henning Sieverts, Echo prizewinner 2010, is one of the most well known bassists in Europe. He can be heard on more than 100 sound recordings (12 under his own name) and has played internationally with numerous stars of the jazz scene. He is an enormously important basis for the project with his accumulated experience and extraordinary playing technique.

Matthias Meusel is another stroke of luck for the "Urban Jazz" project. He is certainly the most versatile, many-sided and skilled drummer in Germany. He set and sets the beat for acts such as Roger Cicero, Tok Tok Tok, Randy Crawford, Tom Gaebel, Ulrich Tukur and many others. With this background, he is of course a very important member of "Urban Jazz", in which precisely the style-overlapping element is so characteristic.

01-10-2013 Fono Forum
"You can listen seldom to electronics integrated into acoustics in such a harmonious way."