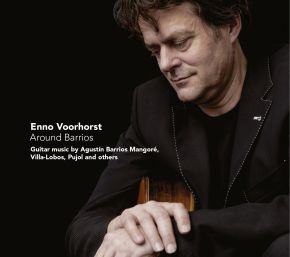 This recording contains a number of compositions carefully selected around the life and work of the greatest composer of the guitar in the 20th century, and includes not only influential works of Spanish composers that appeared in his programs, but also later compositions of guitarists from the New World on whom he had a profound effect. Agustín Barrios Mangoré died almost seventy years ago.

A new generation of artists now champion his work, and Barrios ́ compositions are now standard curriculum in nearly every guitar conservatory in the world. In this recording, Dutch guitarist Enno Voorhorst brings together works written by Barrios as well as composers whose work influenced the master like Heitor Villa-Lobos, Julio Salvador Sagreras, Antonio Lauro, Federico Moreno-Torroba, Francisco Tarréga and Emilio Pujol.