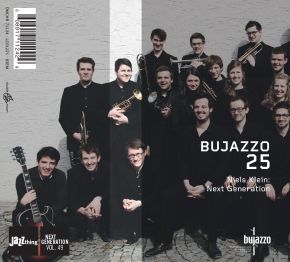 BuJazzO was and remains an endless source, which repeatedly feeds the German jazz scene with new musicians. A real fountain of youth: no one may be older than 24; the band members are replaced after reaching that age.  There is hardly any German jazz musician who did not play at some time in this band during his or her career. The ensemble is under the dual direction of Jiggs Whigham and Niels Klein today.
As a result, the anniversary is also being celebrated with an opulent double CD, which represents the two sides of music of the band. Jiggs Whigham put together a program of his favorite arrangers and composers on the first CD "At The Jazzband Ball". It includes big names from big band literature such as Steve Gray, Bob Brookmeyer, Bill Holman and Francy Boland. On the second CD "Next Generation", conducted by Nils Klein, the band plays a selection of award-winning submissions to the second BuJazzO composition contest. They represent the big-band sound of the young generation. All singers, instrument players and soloists impress with their amazing virtuosity. They sparkle with creativity, and their playing is characterized by surprising maturity and depth, which testifies to the outstanding quality of the band.