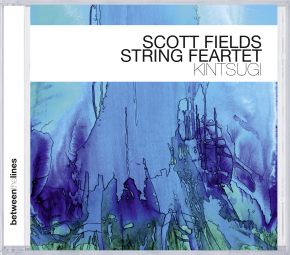 Only strings, 18 of them. What initially sounds like a string ensemble is actually an electric guitar and a trio composed of violin, viola and cello with the peculiar name "Feartet" (a pun on the German word for four “Vier”, quartet, fourtet, Viertett, Feartet). But have no fear, because the four instruments fit together so well into a tapestry of sounds that you ask yourself why this combination is not found more often. The ensemble follows the tracks that Scott Fields created with his compositions. However, it leaves the solid notation foundation repeatedly in improvisations and then gets securely back on track after these excursions. The musicians are afforded a lot of time and space to develop moods and sounds; the longest of the five pieces lasts more than 20 minutes, and you are disappointed when it ends. Melody and rhythm, which dominate our listening habits, experience reorientation in this music. It is not a question of reflecting on our habits, but instead of opening our ears to reinterpretation of the previously heard. In fact, everything can also be found in these recordings, but in a transcendental form. If you let yourself in for it, listen attentively to the music instead of consuming it, you can discover new worlds of music.
It was only a matter of time until Scott Fields (born in 1956) released a work on the Between the Lines label. On one hand, because he meets co-musicians there with whom he has worked  (Gerry Hemingway, Frank Gratkowski, Francois Houle and recently Peter van Huffel). On the other hand, because the Feartet moves exactly "between the lines", somewhere between improvised and new music. However, he started in another genre when he was a teenager, as a rock musician, but he already took excursions into experimental music at that time – after all, he grew up on Chicago´s South Side, home of the AACM. At the beginning of his 20s, he turned his back on music for the most part to study economics and journalism. After he got his Master's degree, his old passion flared again. He began to release CDs starting from 1993, among others, with Marilyn Crispell, Hamid Drake, Joseph Jarman, Rob Mazurek, and Myra Melford. He now lives in Cologne and is so productive that it is almost frightening. He plays regularly with almost a dozen ensembles and constantly composes new pieces of music for various bands.
Elisabeth Fügemann fits well into Feartet, because she not only studied classical cello (at Carl Maria von Weber Music College in Dresden), but also jazz cello at Cologne´s Music Conservatory. She has already won prizes and contests both on the federal and state levels. She is also an instructor and plays in several ensembles, including the Multiple Joy(ce) Ensemble together with Scott Fields.
Axel Lindner (violin) also plays in the Multiple Joy(ce) Ensemble. He studied in Arnheim (NL) and Cologne  and has been an active member of the Cologne jazz scene for years, among other things, as theater musician and as violinist with Hannah Köpf (Double Moon Records, DMCHR 71084). His versatility is his special trademark, and he nimbly ignores all genre limits.
Vincent Royer, born in Strasbourg (F), studied classical violin in Freiburg and Cologne, is a member of renowned orchestras (among others, Gürzenich Orchestra in Cologne) and is also a professor for chamber music in Liège (B). When he was young he became enthusiastic about all kinds of experimental music, computer-supported compositions and free. He has already played alongside Scott Fields for years and also appears on two other Scott Fields CDs.