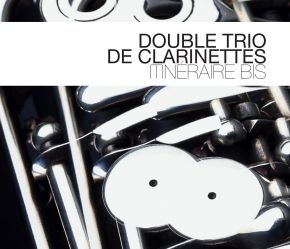 The clarinet has been a pivotal woodwind instrument in classical music for a long time. Important compositions of the 20th century (among others, by Gustav Mahler and Igor Stravinsky) even required increasing the number of clarinets in the orchestra composition. Numerous works have been composed not only for clarinet-orchestra over the centuries, but also for quartets and quintets. The clarinet has also been important in jazz from the start; you only need think of names such as Sidney Bechet and Benny Goodman. The saxophone only displaced the clarinet over the course of time due to its (supposed?) greater expressiveness, but it was still a very popular instrument, especially among innovators (Eric Dolphy, Jimmy Giuffre and John Carter).

However, a work has been created with "Itinéraire Bis" that is in a class of its own, which represents a rarity even in jazz and not just thanks to the very extraordinary musicians. Instead, the reason is that two seasoned teams, which trust each other blindly, have transferred this trust into a sextet. With uncanny instinct and sureness, they follow one another into the great depths of free improvisation and exactly notated arrangements with perfect intonation. They do not limit themselves to prescribed concepts and sounds, but instead overblow, puff, pant and clatter, so that pure joy results. There are sounds, which you would rather locate in the animal kingdom or a factory. And then again very charming melodies – six clarinets in a small but huge cosmos. This is a CD for all, who have looked forward to a real sound for sore ears.

01-02-2014 Jazzthing
"grandiose entertainment"
01-01-2014 Jazzthetik
"The compositions on Itinéraire bis are sometimes acute effervescent, sometimes spherical onomatopoeic. They are austere in form and then full of the desire od freedom."