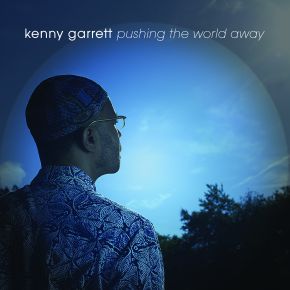 Pushing the World Away

For his third Mack Avenue Records release, Pushing the World Away, alto/soprano saxophonist, composer/bandleader Kenny Garrett literally had to “push away” a steady flow of distractions to get to the inner core of the album, shifting priorities in his schedule and diving deep into the essence of the music.

“I’m always writing, so coming up with the music wasn’t a problem,” says Garrett, who is arguably the most imitated alto saxophone player in jazz. “But I had been traveling a lot with my band, and I don’t rehearse new material on tour. Yet to record an album requires a lot of preparation and to conceptualize the music I had to push away to receive the blessings and gifts from these songs.”

On Pushing the World Away, Garrett continues to mature as a composer. As the late Mulgrew Miller, his close friend for many years, noted in a DownBeat feature on the saxophonist last year: “Kenny has always had a great sound from the beginning. He had his own unique sound, but [thanks to his compositions] that sound has transformed into a more captivating and lyrical voice.”
In all, Pushing the World Away features 12 tunes, all of which were composed by Garrett except for one cover—a superb, lyrical, odd-metered take on the Burt Bacharach/Hal David song “I Say a Little Prayer” (put on the musical map in 1967 as a huge AM radio pop hit for Dionne Warwick). “We played it at sound check while touring in Europe,” Garrett says. “And the people who were working in the venues always applauded. So we knew we had to include this on the album. It feels right.”

In last year’s DownBeat article, Garrett said, “You want to see growth in each album you record.” That’s certainly the case with Pushing the World Away, his 17th album as a leader, which captures the 52-year-old artist at the peak of his creative abilities, both as a saxophonist and as a composer who is committed to clearing the path so that he can delve deeply into his indelible art.

Kenny Garrett (artist)More information
25-07-2014 Jazzflits
"The saxophonist opened as always with full throttle. He accelerated in no time at top speed."
03-07-2014 Jazzmozaiek
"Spicy, exuberant, tasteful"
08-05-2014 Draai om je oren
"The Kenny Garrett Quintet makes music as a roaring machinery with a warm heart."
25-10-2013 NRC Handelsblad
"Interview with Kenny Garrett
"Jazz is jazz. And everyone can find his own way. But you should have a strong connection with the elders of jazz they are the soil at that all motion"
"