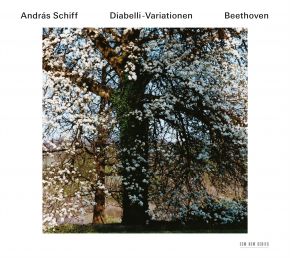 András Schiff has followed up his prize-winning complete set of Beethoven's 32 piano sonatas for ECM with a recording of the Diabelli Variations that is remarkable in many ways.

First, this Hungarian pianist combines the colossal variations with two other major late works from Beethoven's pianistic oeuvre: the Sonata op. 111 and the Bagatelles op. 126 (the former having concluded of course his traversal of the complete Sonatas for ECM). This new recording impressively draws attention to these works’ intrinsic ties to the Diabelli Variations. The Arietta theme in op. 111 and Diabelli's waltz are both set in C major in triple meter, and both begin with an upbeat. Still more striking are the identical intervals that define both themes: the descending 4th from C to G, and the descending 5th from D to G. Further, the bagatelles are far removed from what their title might seem to imply: they are Beethoven's final utterances on his preferred instrument. András Schiff has referred to them as aphorisms,as poetic as they are profound, and even calls the Fourth Bagatelle 'an almost demonic piece of astonishing modernity'.

But the recordings are remarkable for other reasons, too. Rather than using a modern Steinway, András Schiff has recorded them in two different versions on two period instruments. CD 1 (op. 111 and the Diabelli Variations) on an original Bechstein grand from 1921, the instrument preferred by Wilhelm Backhaus and Artur Schnabel, and one in which András Schiff sees an almost forgotten sound-ideal. CD 2 (a second reading of the Diabelli Variations and the op. 126 Bagatelles) is recorded on a Hammerflügel fortepiano from Beethoven's own day which, with its extraordinary extra pedals, reveals the full rich panoply of the composer's sonic universe. This gives listeners a unique opportunity to compare these highly contrasting sonic universes with their rich range of sound, so very different from the balanced, disengaged sound of a modern day instrument.

Finally, András Schiff has been able to consult Beethoven's previously unknown original manuscript of the variations for his recording. Thanks to his initiative and support, this manuscript has been preserved among the holdings of the Bonn Beethoven House since 2009. More than any other source, it sheds light on the compositional process, with Beethoven's penmanship and writing speed offering subtle hints as to crescendos, tempos and arcs of tension. Not only does this source provide insight into the composer's workshop, it also forms an invaluable bridge to Beethoven's intentions.