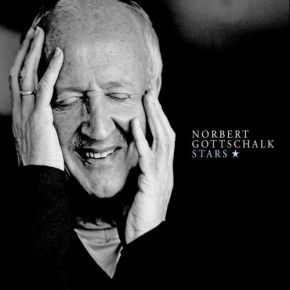 25 years have passed since Norbert Gottschalk, who began his musical career with a scholarship in Hamburg in 1983, brought his first album "Light - Weight - Sight" onto the market as part of a quintet in 1988. It was promptly honoured with a German Record Critics' award. The follow-up production "Two Sessions", again as part of a quintet, was released in 1993. Another highly acclaimed CD debut was released in 2007 as part of a duo with guitarist Frank Haunschild. It may seem like a long time between releases, but Norbert Gottschalk's musical universe sparkles even without an annual CD. His influence has a wide reach, as one of the leading jazz vocalists in Europe, as a guitarist, trumpeter and flugelhorn player, as a lecturer and workshop leader, composer and lyricist. On top of this, his countless live concerts with his own ensembles and as a guest soloist with big bands and orchestras for radio and television appearances.

With "Stars", Nobert Gottschalk has managed to fulfill several wishes at one stroke. For one thing, and after many years working in duos, there was his long-held desire to play with a larger band again. Also, there were a range of "favourite pieces" which Gottschalk wanted to approach in his own inimitable way.

The CD's repertoire consists mostly of original instrumental pieces from contemporary modern jazz. Norbert Gottschalk has written his own lyrics for these melodies, working on equal terms with composers such as Kenny Wheeler, Pat Metheny and Charlie Haden, and lending their music a unique colour and depth.

And last but not least, there is the fulfillment of his third wish for "Stars" - the musicians in his quintet. Hubert Nuss (piano), German Klaiber (bass), Michael Küttner (drums) and Paul Heller (sax) are longtime friends and musical companions of Gottschalk, who wanted to "finally do something together".

They went into the studio with the aim of creating a live situation and making it audible. Together in a room, they play with irrepressible joy and intuitive and agile musical interaction. This combined with the personalities of each musician creates an authentic concert feeling, which they then launch together to the "Stars"!

01-12-2013 Fono Forum
"He is not the loudest jazzsinger, but one of the most certain intonation in Germany."
01-12-2013 Stereo
"With his bright, light-raspy voice, faultless Scating and own-written lyrics to modern Jazz-compositions, Norbert Gottschalk is still without comparison."