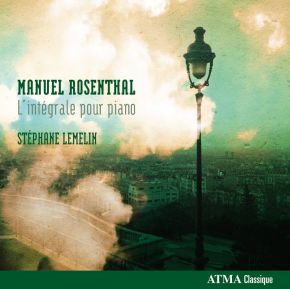 • This new volume of the series Musique française: Découvertes 1890-1939 with pianist
Stéphane Lemelin features the complete piano works of French composer Manuel
Rosenthal. Written over a single decade from 1924 to 1934, these pieces feature a mixture
of musical styles characteristic of French music in the period between the two world wars.
• As a composer, Rosenthal tackled all genres - from operetta to chamber music. His bestknown
work is the ballet Gaîté parisienne (1938), based on tunes by Offenbach. Rosenthal’s
music is distinguished by its clarity and crispness, and demonstrates influences as far
ranging as jazz, pop, and the Neoclassicism typical of the Groupe des Six.
• Stéphane Lemelin performs regularly across Canada, as well as in the United States, Europe
and Asia. A frequent guest of major summer festivals, he has appeared as soloist with many
of Canada’s principal orchestras. He is the artistic director of the Prince Edward County
Music Festival, in Picton, Ontario.