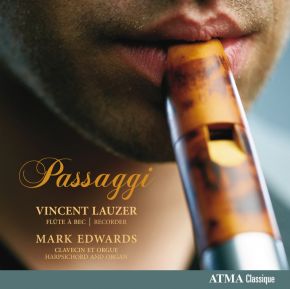 • Vincent Lauzer presents Passaggi, his debut recording on the ATMA label, featuring
Italian music for recorder from the 16th and 17th centuries by Bassano, Frescobaldi, and
Castello, among many others. Lauzer was named Révélation Radio-Canada for 2013-2014
and Discovery of the Year at the Opus Prize gala event in 2012,
• In 2012, Vincent Lauzer won the First Prize during the Stepping Stone of the Canada Music
Competition and the Career Development Award from the Women’s Musical Club of
Toronto. He has also won several first prizes in regional and provincial competitions
including the Grand Prize, in 2008 and 2009, of the Canada Music Competition in the 19
to 30 years old category.
• Since winning first prize at the 2012 Musica Antiqua Bruges International Harpsichord
Competition, Canadian harpsichordist and organist Mark Edwards has quickly earned
recognition for his captivating performances, bringing the listener “to new and
unpredictable regions, using all of the resources of his instrument, [...] of his virtuosity,
and of his imagination” (La Libre Belgique).