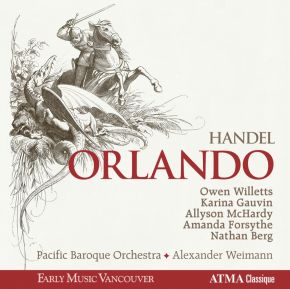 • The complete version of Orlando, considered to be one of Handel’s most
successful operas, is presented for the first time on a Canadian label.
• Singing the title role is the English countertenor Owen Willetts, a rising figure on
the international scene. He is joined by the American soprano Amanda Forsythe,
and several of the finest Canadian singers: Karina Gauvin, Allyson McHardy,
and Nathan Berg.
• The Pacific Baroque Orchestra (PBO) is the only professional period-instrument
orchestra west of Toronto. Under the direction of renowned conductor and
harpsichordist Alexander Weimann, the PBO is recognized as one of Canada’s
most exciting and innovative ensembles performing “early music for modern
ears.”
• This recording was produced following Orlando’s performances at the 2012
Vancouver Early Music Festival.