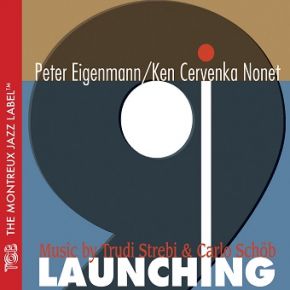 Occasionally one has plenty of time to think. Recently, guitarist Peter Eigenmann had time to think, and he remembered some forgotten wishes. For years, Peter had hoped to meet Ken Cervenka again, to add to his quartet a formation of horns, to play original music written especially for his band, and to work together with two gifted composers he has known well for years: Trudi Strebi and Carlo Schöb. With this recording, all of those wishes came true. Peter Eigenmann uses the experience he gained from playing with Benny Bailey, Ed Neumeister and many others. And the focus of his playing in recent years has turned more and more into finding refined tonal colors in his strings.

Ken Cervenka is a lyrical and sophisticated voice on trumpet and flugelhorn. Among others, he has played with Jerry Bergonzi, Jaki Byard, Mick Goodrick, and he is a Professor at “Berklee College of Music” in Boston, Massachusetts U.S.A. He came to Europe more than thirty years ago to play with Peter Eigenmann for six weeks. Though it took longer than they may have liked to arrange a second encounter, this album is evidence that they still match well.