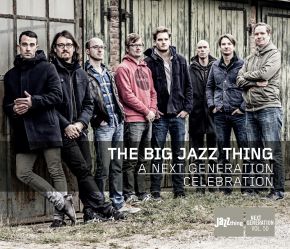 A Next Generation Celebration

A series unique in the world is celebrating its anniversary: "Jazz thing Next Generation" was started 10 years ago.
The 50th release of the series collects an "All-Star Band" from 10 years with no fewer than four ECHO prizewinners! It presents eight compositions of the participating musicians. Most of the pieces have already been on the respective CDs of the composers, but now appear in a new look. Stefan Schultze, bandleader of "Oktoposse" (Vol. 6) and arranger in big demand for large bands has tailored the arrangements of "Big Jazz thing" to custom-fit and contributed a piece of his own as well. As a result, almost a big band sound was created, which is crowned by the performances of the soloists.
However, the octet has not limited itself only to go into a studio in April 2013 and – following a crammed-full live concert – provide proof of their skills one time. Instead, the band has already given other concerts, for example, the opening concert at Elbjazz in Hamburg and at the Palatia Festival in Rheingau. Additional festivals are going to follow, and fans have the possibility to experience "The Big Jazz Thing" live this fall throughout Germany. In other words, not a flash in the pan, but a one-year band, because all are going to concentrate completely on their own projects again after the last concert in the spring of 2014.