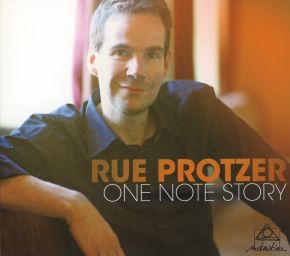 Rue Protzer caught the lasting attention of the press and general public with his trilogy in the years 2006 to 2009. With his band "Rue de Paris" in which Marc Johnson, Adam Nussbaum, Randy Brecker and Lee Konitz participated, among others, he released "Quiet Motion" (Sony), "New York Slow" (Sony) and "Trois" (Intuition). After he completed that project, Protzer took a lot of time to develop his new music statement. While the trilogy mainly followed peaceful and contemplative paths, a rhythmic about-face has now followed. The first song ("Funky Funky") already makes it clear where this journey is going. However, neither this song nor the first sounds should lead you astray into expecting pulsating, simple and popular funk designed for the dance floor. When you listen carefully, you realize that refined offbeats and finely chiseled changes of focal points are behind the strong rhythms. You discover that the melodies are strong and that you can even sing along, but they are still filled with refinements. In addition, the harmonies are woven with anything but uninspired patterns. The handpicked musicians are only able to start on their soloist excursions with this basis. This applies above all to the ballads, which display Protzer's power of composition to a very special degree once again. At the end of the CD, you are surprised to have discovered that funk jazz in this form not only has an infectious rhythm, but that it can also be very relaxed and relaxing. "There are many pieces in irregular meters on this album. I considered it very important that they do not sound like figments of imagination, but that they also work for producing a gut feeling, i.e., are convincing on an emotional level," Rue Protzer said.

28-01-2014 Rootstime.be
"The first song "Funky Funky" is exactly what the name says, swinging and funky, the other songs are much more laidback. "