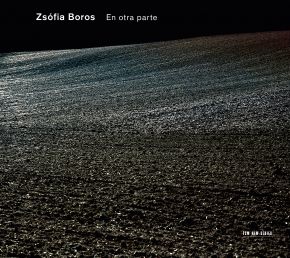 The evocative ECM debut of the highly-talented Hungarian guitarist Zsófia Boros (born 1980) addresses a broad range of composition for her instrument, on this recording drawing primarily on music of the Americas. At the centre of En otra parte is music of Leo Brouwer (b. 1939), the Cuban composer who viewed the guitar as an orchestra and once declared that it has “no limits”. Brouwer’s work has been a major reference for Boros from the beginning of her musical journey. “Often I think I am holding the choice of music in my own hands,” she writes, “but later I wonder if the music has chosen me as a medium. My approach is always very intuitive; when a piece of music grips or touches me, I want to reflect it – to become a mirror and convey it.”

Boros first heard Brouwer’s “Un dia de noviembre” at a concert when she was around fifteen. Playing the piece changed, she says, the nature of her relationship to music. She studied at the Bratislava Music Conservatory, the Bela Bartok Conservatory in Budapest, and the University of Music and Performing Arts in Vienna, but gained her most important insights less through analysis than through “building up a direct relationship with every single note, every individual pitch” in a composition, through the experience of playing. “For me, pitches are like people; they have their own voices, their own durations, and yet their true character only comes to the fore in relation to other tones.”

Zsòfia Boros is the recipient of numerous awards, taking First Prizes at the North London Music Festival, the Concorso Internationale Val Tidone, the Paganini Competition in Parma, and the Premio Enrico Mercatali in Gorizia.