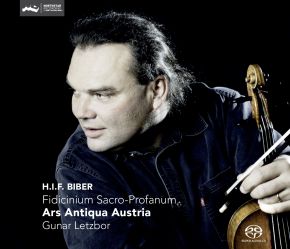 H.I.F. BIBER: a genius, whose life story is for the most part unresearched, a violin virtuoso who raised the technique of violin playing in Austria to an incredibly high level, a man of incredible powers of imagination and the courage to venture on abstraction. The complexity of his work is astonishing, his oeuvre encompasses a range from richly orchestrated church music, artfully elaborated chamber music, to virtuoso music for his personal solo instrument, the violin.

In his collection FIDICINIUM SACRO PROFANUM Biber set new standards also in the field of string chamber music. In the first part the master composes for five-part string ensemble: 2 violins, 2 violas, violone and basso continuo were established at his time as the standard ensemble in Austrian cultural circles. In a richly coloured, five-part setting, Biber artfully weaves a polyphonic texture that allows one or more parts to alternate and come

to the fore. In the second part of this colletion he dispenses with the five-part arrangement hitherto predominant in Austria. He compensates for the luxury of sound by augmenting the flexibility of the four individual parts.

Perhaps it is simply the humility and clear, alert ear of all the musicians in the ensemble in confrontation with the special qualities of Biber’s chamber music that convey to the audience the qualities of the master’s musical message!
Gunar Letzbor

I\'m awaiting this recording very much! :)

Gunar Letzbor (conductor)More information
12-07-2015 The Observer
"["].. Don't be put off by the title: this is wonderful music, and all the words indicate is that the pieces can be used in church or court.""
24-11-2014 Classics Today
"Profanum are based primarily on the Italian church sonata form and, like other similar string settings of the period, are moderately complex yet beautiful works abundant in rich chromaticism, harmonic diversity, and textural intricacy.I’ve been a fan of Ars Antiqua Austria and its illustrious director, Gunar Letzbor, for many years"
29-09-2014 Music Web International
"["].. The music of Heinrich Ignaz Franz von Biber is quite popular among violinits and string ensembles as well as audiences. However, as Gunar Letzbor rightly points out in his liner-notes, the interest is a little one-sided: it is the Rosary (of Mystery) Sonatas in particular which attract performances.""
01-04-2014 BBC Music Magazine
"Gunar Letzbor and his Ars Antiqua Austria are among pre-eminent artists in bringing to life the Austrian and Bohemian music of the 17th century. This disc leaves us in no doubt about their disciplined ensemble playing and their feeling for lively characterisation."
01-04-2014 Fono Forum
"Biber would like it."
01-04-2014 Early Music Review
"These performance gets right to the heart of the music in all its complexity and really brings it to life (...)"
01-04-2014 The Strad
"Performing with taste and refinement, the players transform each sonata into a kind of wordless mini-drama, revealing many fine interior details.
The recording is clean and vibrant, with enough background resonance to give the music a sense of space."

01-03-2014 Concerto
"theatrical plasticity"
03-01-2014 The Irish Times
"(...) the musical invention is fantastical and wayward, chromatically adventurous in ways that are more oftrn associated with the 20th century than the 17th. Intoxicating stuff."