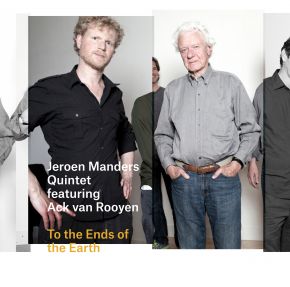 'To The Ends Of The Earth' is Jeroen Manders debut album as a bandleader. That the saxophonist and composer from The Hague has acquired a complete 'all-stars' cast for his debut is a testament to his enormous quality as a musician. It also attests to the intoxicating energy and enthusiasm that Manders manages to directly transfer onto his quintet colleagues. His fellow musicians on this production really are the crème de la crème of the Dutch jazz scene, and include; his former teacher and continuing role-model Ack van Rooyen on flugelhorn, two friends from his studies at the Royal Coservatory and renowned musical colleagues Wim Kegel (on drums) and Marc van Roon (a remarkable pianist who can play keyboard and acoustic piano at the same time), and finally the exceptional bassist Erik Robaard.

'To The Ends Of The Earth' has become an album that celebrates completely and with great sensibility the real purpose and aspiration of all musicians - the music! It celebrates the melodic side of jazz, “story telling at it's best", but with a musical sophistication and intensity that totally precludes any banalities from the very beginning. Jeroen Manders said: "I wanted to make an album about music - about nothing but music - without unnecessary extras and fake or excessive concepts". In this regard, the Jeroen Manders Quintet has been more than successful!

This album was made possible by the producer duo Geneviève and Ulrich Haenisch. Geneviéve is a student of Jeroen Manders, and Geneviève and Ulrich have a very special appreciation for music and have garnered the esteem of these artists. A gift to all of those who can now share in 'To The Ends Of The Earth'. Thank you...

I doff my hat to these guys (Jeroen Manders, Erik Robaard, Wim Kegel). I first came acroos them accompanying Ann Thomas as The Ann Thomas Quintet. I have been looking forward to getting for of their work. Jeroen Manders just blows you away on that saxophone

Ack van Rooyen (featured)More information
13-05-2014 Jazzism
"Due to the elegant swing of the band you get in the mood to hear 'real jazz' again"
29-11-2013 www.rootstime.be
""New One", his own track is dedicated to Jeroen's daughter Phoebe, Jeroen plays a strong solo, a bit in the vein of the earlier work of Wayne Shorter. "Papa can you hear me" by Michel Legrand, is a beautiful balad, the good old Ackie that sets the tone with his lyrical game""