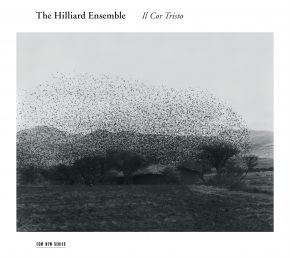 One of the world’s finest vocal chamber groups, the Hilliard Ensemble has a formidable reputation in the fields of both early and new music. The programme featured here exemplifies its distinctive style and highly developed musicianship in both repertoires. At its heart is a work commissioned by the ensemble from British contemporary composer Roger Marsh: Il Cor Tristo, a setting of cantos 32 and 33 from Dante’s Inferno, which deftly blends Renaissance techniques with a modern idiom. Marsh’s composition frames settings of Petrarch by 16th century composers Bernardo Pisano (1490-1548) and Jacques Arcadelt (c 1507-1568). As so often with the Hilliard singers, the transitions between “old” and “new” are seamless, and the album unfolds like a larger composition. Here one must also credit composer Marsh, who notes that his “primary concern has been to keep Dante’s words clear at all times, and thus you will find in this contemporary music many devices more usually encountered in music of much earlier times.”

Marsh’s Il Cor Tristo was premiered by the Hilliard Ensemble in Perugia, Italy in September 2008. The version here was recorded, along with the Pisano and Arcadelt pieces, in November 2012, at the St Gerold monastery in Austria, location for outstanding Hilliard recordings including the collaborations with Jan Garbarek (Officium, Mnemosyne, Officium Novum) the Bach project with Christoph Poppen (Morimur), Arvo Pärt’s Da Pacem Domine, as well as motets of Guillaume de Machaut, 16th century English music (Audivi Vocem) and more.

Il Cor Tristo is released as the Hilliards both celebrate their 40th anniversary and embark on their final year together: at the end of 2014 the group will disband. The Hilliards’ last year will be a creative summing-up. David Jones explains: “As well as all the music that we have discovered and enjoyed performing over the years, we want to embrace the important relationships and people that have contributed to some of the remarkable landmarks and turning points in our career”.

The Hilliard Ensemble gave its first concert in London, on December 11 1973. Exactly 40 years later, on December 11, 2013, the group kicks off its final year with a concert at the London Spitalfields Festival which will include repertoire performed at the very first show – music by Byrd and by Britten – as well as Pérotin, Victoria, Josquin des Prés, and a new composition written for the group by Roger Marsh, Poor Yorrick. The Marsh piece is for eight voices, and the Hilliard Ensemble will be augmented by former members John Potter, John Leigh Nixon, Paul Elliott, and Errol Girdlestone. This eight-piece edition of the Hilliards gives two further concerts, in Paris on December 12 and in Munich on December 13.

All through 2014, the Hilliard Ensemble is touring very widely. In January alone, they perform in Australia, on the East and West Coasts of the US, and in Canada. Events in March include a revival of Heiner Goebbels’ music theatre piece for the Hilliards, I went to the house but did not enter, at the Lyon Opera House. Saxophonist Jan Garbarek will join the group for a last round of Officium concerts in Austria, Germany, Italy, Switzerland and the UK. Many other events are planned. Visit the ensemble’s website www.hilliardensemble.demon.co.uk for more details.

Further ECM recordings with the Hilliard Ensemble will be issued in 2014.

CD booklet for Il Cor Tristo includes texts by Dante and Petrarch in Italian and English, and liner notes by Paul Griffiths.