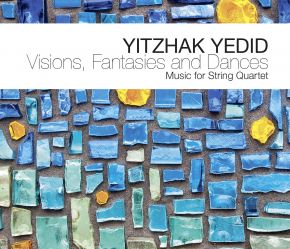 The spiritual experience of Yitzhak Yedid as a child chanting the Baqashot at the well-known Ades Synagogue in Jerusalem inspired this composition. Baqashot are collections of supplications, songs and prayers that have been sung by the Sephardic Syrian Jewish communities for centuries. "Every Shabbat during winter months my father woke me up a few hours after midnight to walk to Ades Synagogue to participate in the singing until dawn. Later in my life I was able to distinguish between different Maqamat. This attracted me to explore classical Arabic music and heterophonic textures, and, just as has occurred in Baqashot, to compose works that merge Maqamat with Jewish themes. Since I trained in Western classical music and practice improvisation (as a pianist) it seemed appropriate to merge these different influences" says Yedid.

And so, Visions, Fantasies and Dances is an authentic expression of new music which incorporates a wide spectrum of contemporary and ancient styles. It creates a confluence between the heterophonic textures of Arabic genres (classical Arabic music and Arabic-influenced Jewish music) and the compositional approaches of contemporary Western classical music. Amongst the Western composers of special importance to Yedid are Béla Bartók (1881-1945), György Kurtág (b. 1926), György Ligeti (1923-2006), Olivier Messiaen (1908-1992), Alfred Schnittke (1934-1998), Arnold Schoenberg (1874-1951), Stefan Wolpe (1902- 1972) and John Zorn (b. 1953).